Beyond the hills are
Mountains; beyond the mountains
Is the sky; beyond –

When significant people die, we often hear “Their like will not be seen again”.  In truth we don’t know that.  How could we?

The more aching a death leaves us, the more its true significance – I propose – includes Grab that torch.

If we feel helpless at an important loss, we can take that as a kind of compliment to the actor who left the stage.

We can conclude Let us do as well in our way as he did (as it happens, Mike and Steve were men) in his way.  This can even be among the challenges of diversity. 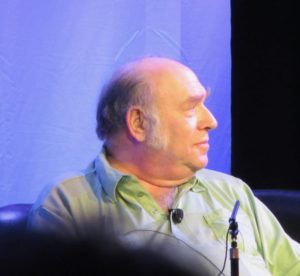 In 2007-2018 he was a judge for the Cordwainer Smith Rediscovery Award.  He won the Skylark in 1995, the Writers of the Future and Illustrators of the Future Lifetime Achievement Award in 2017.  He was Author Guest of Honor at the 70th World Science Fiction Convention.  He was executive editor of Jim Baen’s Universe, and founded Galaxy’s Edge, now in its seventh year.  He edited forty anthologies.  His papers are at the University of Southern Florida in Bulgarian, Czech, Dutch, English, French, German, Hungarian, Italian, Japanese, Lithuanian, Polish, Romanian, Russian, Spanish, and Swedish.

Among his various collections the titles Once A Fan…. (2002) and ….Always a Fan (2009) are telling.  Once has among various lists “My 25 Favorite Fanzines”.  In the costume competition we call the Masquerade, he and his wife Carol, who survives him, won major awards at four Worldcons; he judged Masquerades and was Master of Ceremonies.  Among his various anthologies are Alternate Worldcons (1994) and Again, Alternate Worldcons (1996).  At the 60th Worldcon he led a fanhistory tour.  Among things he called outstanding at the 50th Worldcon was the arrival of Harry Warner’s fanhistory A Wealth of Fable in a hardcover edition.  He wrote for Challenger, File 770, Lan’s Lantern, Mimosa.

He believed that whether or not you can pay it back, you should pay it forward; he was known for giving a hand to authors younger in their careers, many now calling themselves Mike’s Author Children – besides his daughter Laura.  Three of his Hugo finalists were Putting It Together: Turning Sow’s Ear Drafts into Silk Purse Stories (2001), I Have This Nifty Idea … Now What Do I Do With It? (2002), and The Business of Science Fiction (2011).

I’ll mention two moments I was in and one I saw.  When The Dying Earth (J. Vance, 1950) was on the Retrospective Hugo ballot for Best Novel at the 59th Worldcon he said “If Kirinyaga [MR, 1998] is a novel, it’s a novel.”  Another time, of Second Foundation (I. Asimov, 1953) he said “Having nearly destroyed the Seldon Plan with a Mule, he shouldn’t have saved it with a planet of Mules.”  In one of his stints as Masquerade M.C. – he was otherwise unstinting – an entrant shot him with a tachyon gun: he froze, motionless: as Diana Morales sang in A Chorus Line (1975), What he did for love. 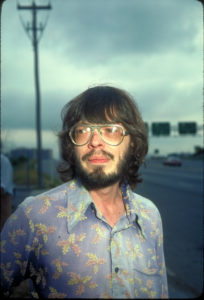 Jophan says, pub your ish; Steve did, sometimes; there were nine years between Sam 14 and 15, thirty-one between Sam 15 and 16.  In Mimosa 18 he said the first two issues of Sam had appeared by 1956, when he was thirteen; in Sam 16 he said Sam 1 came in 1960; Sam 18, the latest I know of, is dated 2016.  This is Fanzineland, where zines come and go; Science Fiction Five-Yearly – which also had his fanart, sometimes on the cover – was published on time for sixty years.

Also in 1968 he was already well enough known and loved that he was voted the Trans-Atlantic Fan Fund delegate, over Ed Cox and Ted Johnstone; his TAFF report Harrison Country, which began to appear in 1968, was completed in 2006, its various chapters collated and published in 2007, including TAFF Terror Tales 3 originally pubbed, as TAFF has sometimes done, to solicit votes in the next year’s contest, Stiles having become in turn the North America administrator: a pastiche of Krazy Kat (1913-1944), reprinted in Locus 56 and Chunga 12, where Randy Byers said (p. 6)

Steve managed not only to capture Herriman’s drawing style, but also the dialect of the characters, the wordplay, the ever-mutating abstract landscape, the self-awareness of the frame, and the strip structure that renders mini-stories within each strip but also builds a larger story between strips … fannish and also stefnal (or at least Dickian [i.e. Philip K.])….  fans were jiants in those days.

Science at its root
Tells us knowledge; are artists,
Even, scientists?
Voluptuously they look
Each to each at what and how.

Let’s look forward.  We have to anyhow.  In Mimosa 30 I called an article “Forward to the Basics” saying we couldn’t go back to the basics, because it wasn’t so clear we ever had them, and because anyhow we couldn’t go back.  We can look back, and we should; but we can only go forward.  In File 770 152 reporting the Yokohama (65th) Worldcon I said I was struck by the Japanese proverb On-ko chi shin, “Study the old to appreciate the new”.

Originally faan was an unhappy form of fan; the extra a, or more of them e.g. faaan, signified excess; enough of this lingered in 1975, when Moshe Feder and Arnie Katz started the FAAn Awards, that the name showed a self-depreciation thought suitable; the FAAn Awards were given 1975-1980, then 1994 to date; since their revival they have been associated with the annual fanziners’ convention Corflu (corflu = mimeograph correction fluid, once indispensable).  Jophan is the protagonist in The Enchanted Duplicator (Willis & Shaw, 1954; “Once upon a time in the village of Prosaic in the Country of Mundane there lived a youth called Jophan…. strange longings … from time to time perplexed his mind … which none of the pleasures offered by Mundane could satisfy”; duplicator in the sense of a machine for printing fanzines); earlier Bob Tucker used “Joe Fann” in Le Zombie for quips he wished some reader had sent in; “Come on, publish the next [or first!] issue of your fanzine” is an encouragement for all; among many instances, Art Widner used to wear a T-shirt with ”Jophan says, pub your ish”.  Stefnal, our old adjective, from Hugo Gernsback’s word scientifiction; Rick Sneary’s spelling is evoked by jiant.  My poem at the beginning is in unrhymed 5-7-5-syllable lines, like Japanese haiku; at the end, an acrostic (read down the first letters of each line) in unrhymed 5-7-5-7-7-syllable lines, like Japanese tanka.