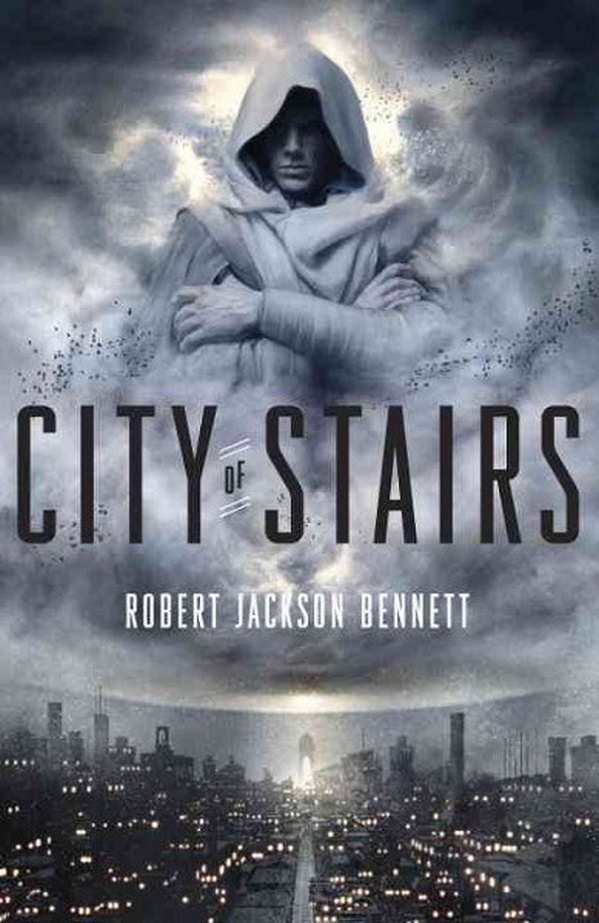 By JJ: It’s been more than a year and a half since I first read Robert Jackson Bennett’s City of Stairs. Like a lot of other Filers, I was absolutely blown away by that book when it came out – and I’m still pretty unhappy about it having been bumped off the Hugo ballot by the slating nonsense; otherwise, according to the nominating stats, it would have been a Hugo Finalist in 2015.

And Worldcon voters weren’t the only ones who liked it: City of Stairs was a Finalist for the World Fantasy Award and the British Fantasy Society’s Robert Holdstock Award, and it came in second on the annual Locus Magazine Readers’ Poll for Best Fantasy Novel.

I hadn’t got around to reading its 2016 sequel City of Blades yet, but was definitely going to do so before the 2017 Hugo nomination deadline – so when I recently had the opportunity through NetGalley to get an advance eARC of the third book in the series*, City of Miracles, I decided to do a re-read of the first book before diving into the sequels.

The Divine Cities are the legacy of a previous age, when six Divines – entities with godlike powers, each with distinctive personality attributes and their own dedicated followers – reigned over segments of The Continent: “Olvos, the light-bearer. Kolkan, the judge. Voortya, the warrior. Ahanas, the seed-sower. Jukov, the trickster, the starling shepherd. And Taalhavras, the builder.” 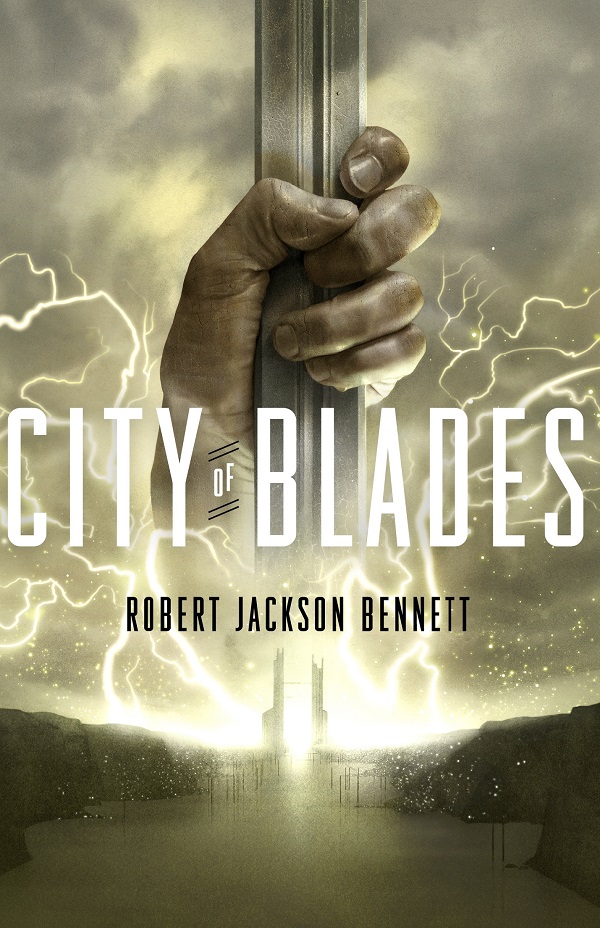 During the many centuries of their reign – a sort of Golden Age – the Divines manifested numerous miraculous acts – some of which their followers were able to subsequently perform themselves. They created many objects and living entities in which were embodied miraculous properties and capabilities.

But there was a dark side to this Golden Age: the Divines, and the Continentals, had subjugated the inhabitants of Saypur, a land across the ocean. Saypuris were servants and laborers who provided much of the bounty of food, natural resources, and technology from which the Continentals benefited. Despite this, the slaves of Saypur were denied access to miracles.

And as oppression always does, this injustice inevitably resulted in the rising of a mighty Saypuri adversary, who studied the Divines for years and eventually determined a way of defeating them.

One of the Divines had disappeared many years before the battle with the Kaj, their fate unknown. The rest of the Divines are believed to be dead, killed by the Kaj’s secret weapon – and most of the miraculous acts and objects tied to the Divines have lost their special powers.

What’s more, the Continent’s majestic capital city of Bulikov underwent a massive transformation at the moment of the Divine deaths. In an occurrence now known as The Blink, huge portions of the city, its skyscrapers, other buildings, and residents, simply ceased to exist; other buildings are now warped and twisted versions of their original forms, and there are now-useless stairways, arches, and bridges which trail off into the air. 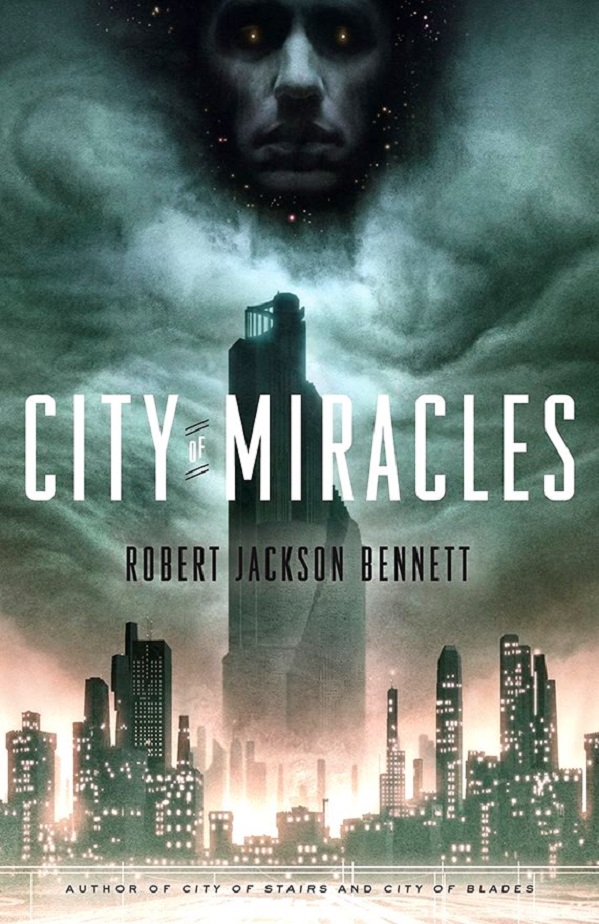 It’s been a few hundred years since the death of the Divines, and the Continent is now “administered” by representatives of the Saypuri government who live in the conquered land.

This is the setting where we first encounter one of the most intriguing protagonists I’ve encountered in a while: Shara Thivani. Supposedly a low-level consular official, she is actually a secret intelligence operative attempting to discover the truth about the death of her former teacher and mentor.

In turns arrogant and humble, harsh and kind, foolish and exceedingly clever, Shara is a contradictorily appealing character. In conjunction with her unlikely allies – the huge, indestructible warrior Sigrud, and the astute but taciturn Governor Turyin Mulaghesh, she stubbornly unravels the mysteries and the conspiracies to uncover a world-changing revelation.

Mystery, spies, magic, and an elaborate, fascinating world: I found it an irresistible combination – one that kept me up at night when I should have been getting sleep for work the next day.

* in exchange for an honest review — as if they were likely to get anything but an honest opinion from me, the more fools they  😉 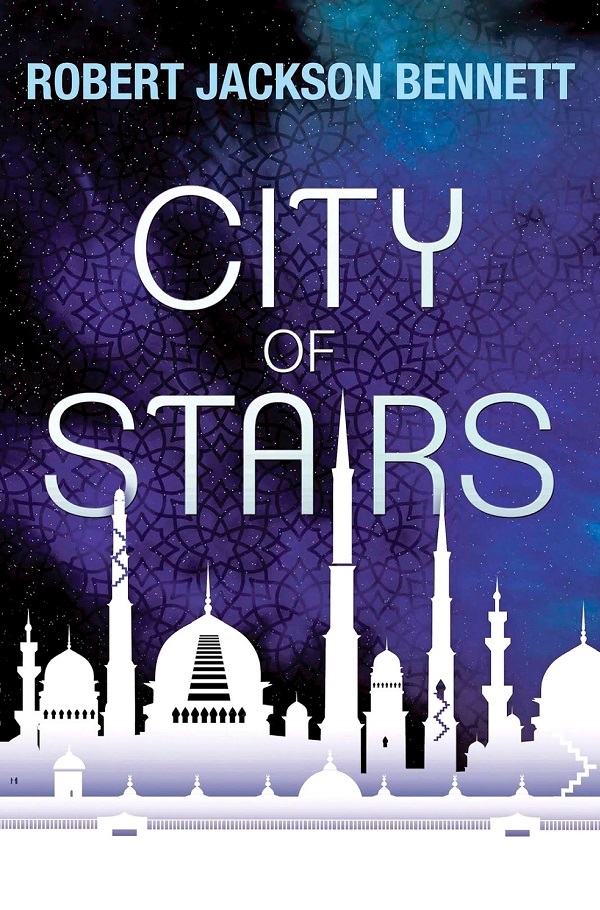 The city of Bulikov once wielded the powers of the gods to conquer the world, enslaving and brutalizing millions – until its divine protectors were killed. Now Bulikov has become just another colonial outpost of the world’s new geopolitical power, but the surreal landscape of the city itself – first shaped, now shattered, by the thousands of miracles its guardians once worked upon it – stands as a constant, haunting reminder of its former supremacy.

Into this broken city steps Shara Thivani. Officially, the unassuming young woman is just another junior diplomat sent by Bulikov’s oppressors. Unofficially, she is one of her country’s most accomplished spies, dispatched to catch a murderer. But as Shara pursues the killer, she starts to suspect that the beings who ruled this terrible place may not be as dead as they seem – and that Bulikov’s cruel reign may not yet be over. 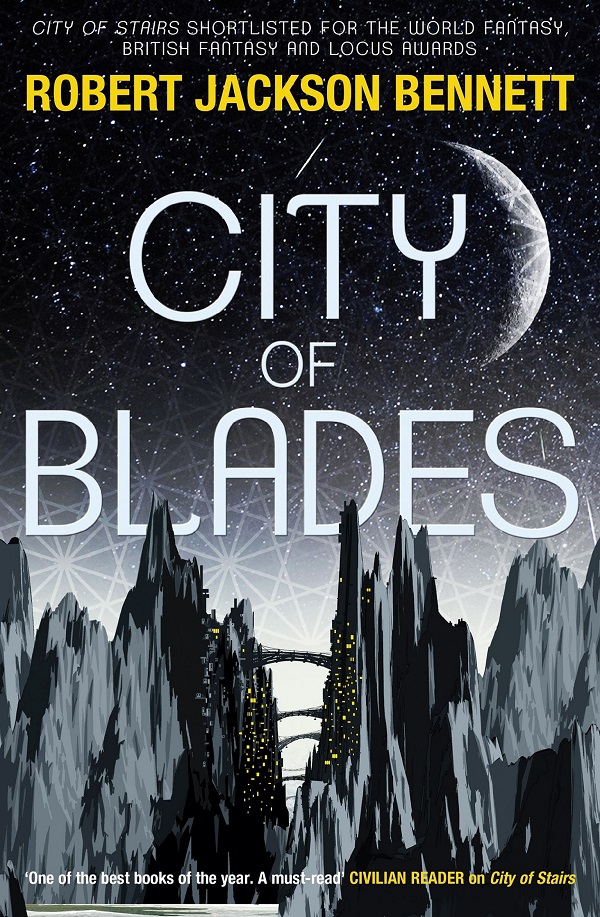 A generation ago, the city of Voortyashtan was the stronghold of the god of war and death, the birthplace of fearsome supernatural sentinels who killed and subjugated millions.

Now, the city’s god is dead. The city itself lies in ruins. And to its new military occupiers, the once-powerful capital is a wasteland of sectarian violence and bloody uprisings.

So it makes perfect sense that General Turyin Mulaghesh – foul-mouthed hero of the battle of Bulikov, rumored war criminal, ally of an embattled Prime Minister – has been exiled there to count down the days until she can draw her pension and be forgotten.

At least, it makes the perfect cover story.

The truth is that the general has been pressed into service one last time, dispatched to investigate a discovery with the potential to change the world – or destroy it.

The trouble is that this old soldier isn’t sure she’s still got what it takes to be the hero. 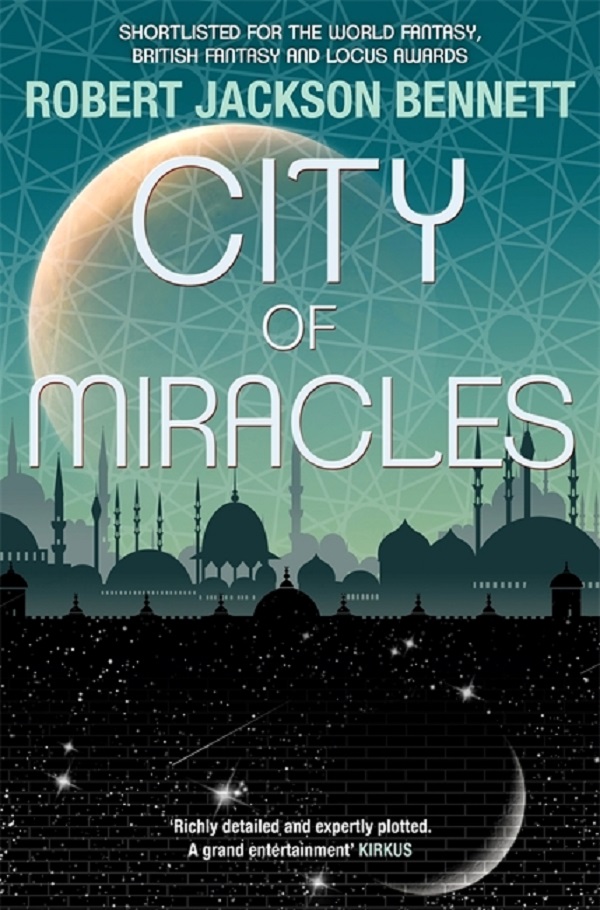 Revenge. It’s something Sigrud je Harkvaldsson is very, very good at. Maybe the only thing.

So when he learns that his oldest friend and ally, former Prime Minister Shara Komayd, has been assassinated, he knows exactly what to do – and that no mortal force can stop him from meting out the suffering Shara’s killers deserve.

Yet as Sigrud pursues his quarry with his customary terrifying efficiency, he begins to fear that this battle is an unwinnable one. Because discovering the truth behind Shara’s death will require him to take up arms in a secret, decades-long war, face down an angry young god, and unravel the last mysteries of Bulikov, the city of miracles itself. And – perhaps most daunting of all – finally face the truth about his own cursed existence. 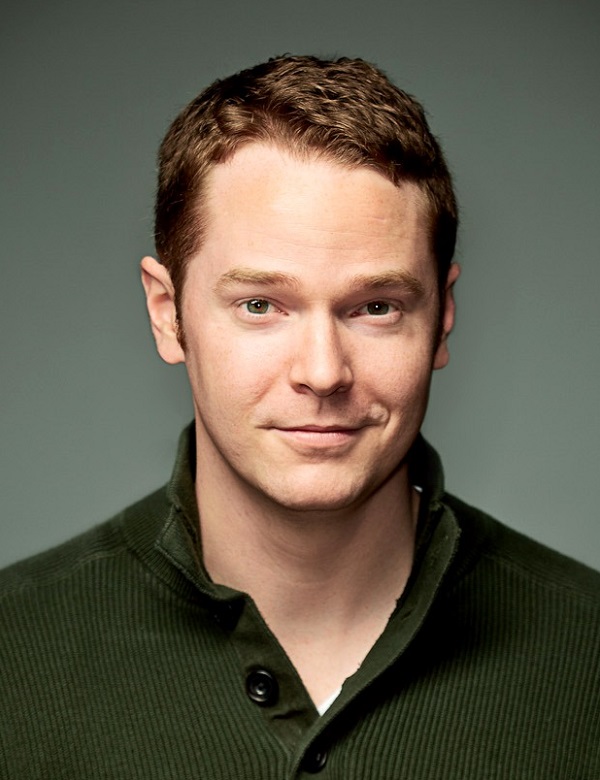 Other works by Robert Jackson Bennett:

The year is 1919. The McNaughton Corporation is the pinnacle of American industry. They built the guns that won the Great War before it even began. They built the airships that tie the world together. And, above all, they built Evesden – a shining metropolis, the best that the world has to offer. But something is rotten at the heart of the city. Deep underground, a trolley car pulls into a station with eleven dead bodies inside. Four minutes before, the victims were seen boarding at the previous station. Eleven men butchered by hand in the blink of an eye. All are dead. And all are union. Now, one man, Cyril Hayes, must fix this. There is a dark secret behind the inventions of McNaughton and with a war brewing between the executives and the workers, the truth must be discovered before the whole city burns. Caught between the union and the company, between the police and the victims, Hayes must uncover the mystery before it kills him.

It is the time of the Great Depression. Thousands have left their homes looking for a better life, a new life. But Marcus Connelly is not one of them. He searches for one thing, and one thing only: Revenge. Because out there, riding the rails, stalking the camps, is the scarred vagrant who murdered Connelly’s daughter. One man must face a dark truth and answer the question – how much is he willing to sacrifice for his satisfaction?

Vaudeville: mad, mercenary, dreamy, and absurd, a world of clashing cultures and ferocious showmanship and wickedly delightful deceptions. But sixteen-year-old pianist George Carole has joined vaudeville for one reason only: to find the man he suspects to be his father, the great Heironomo Silenus. Yet as he chases down his father’s troupe, he begins to understand that their performances are strange even for vaudeville: for wherever they happen to tour, the very nature of the world seems to change. Because there is a secret within Silenus’s show so ancient and dangerous that it has won him many powerful enemies. And it’s not until after he joins them that George realizes the troupe is not simply touring: they are running for their lives. And soon… he is as well.

Some places are too good to be true. Under a pink moon, there is a perfect little town not found on any map. In that town, there are quiet streets lined with pretty houses, houses that conceal the strangest things. After a couple years of hard traveling, ex-cop Mona Bright inherits her long-dead mother’s home in Wink, New Mexico. And the closer Mona gets to her mother’s past, the more she understands that the people of Wink are very, very different…

Robert Jackson Bennett was born in Baton Rouge, Louisiana. He moved to Austin, Texas, and studied at the University of Texas. Bennett is a two-time award winner of the Shirley Jackson Award for Best Novel, an Edgar Award winner for Best Paperback Original, and is also the 2010 recipient of the Sydney J Bounds Award for Best Newcomer, and a Philip K Dick Award Citation of Excellence. City of Stairs was shortlisted for the Locus Award, the World Fantasy Award, and the Robert Holdstock Award. His seventh novel, City of Miracles, will be released on May 2, 2017 in both the US and the UK. Bennett lives in Austin with his wife and sons.