Trolls abusing Facebook’s automated complaint system got David Gerrold banned for a post he made about Pride Month reports Jim Wright of Stonekettle Station. Here is an excerpt from Wright’s own comments about the situation, and the screencap is reproduced below.

The attached picture is a screencap, a short Facebook post written by an incredibly talented man. This man has quite literally written himself into the very fabric of history. You know him, even if you don’t know that you know him. Some of the ideas you have, some of the phrases you say, he wrote them and they became part of our culture. He is brilliant. He’s charming. He is fearless. He is kind and generous to a fault and far too tolerant of fools and the foibles of his fellow man.

He works every day to leave the world a better place for all Americans.

He also happens to be gay.

He also happens to be my friend, David Gerrold.

That post, the one attached below, was written by Gerrold in response to the hate LGBT people face every day. Every. Single. Day. Every. Day. Relentlessly. Hate he very much has personal experience with. Hate that I myself have witnessed firsthand.

Don’t believe me? About the hate?

No, it’s not the profanity. Profanity is not a violation of Facebook’s terms of use.

It’s the same thing that got me banned. A group of haters, small men, small in heart, small in vision, small in America, small in their small hate, abused Facebook’s automated complaint system to silence a man who spoke up for the rights of others.

To silence a man who spoke up for the rights of others.

And that is just about as unAmerican as it gets.

This must not stand. Not this month, not ever.

Wright calls on FB users to use its “Report a Problem” feature to call for the restoration of Gerrold’s FB access and his deleted post. At this time Wright’s message has received over 4,200 likes and been shared 1,684 times.

Here’s the text of Gerrold’s post, quoted with his permission. 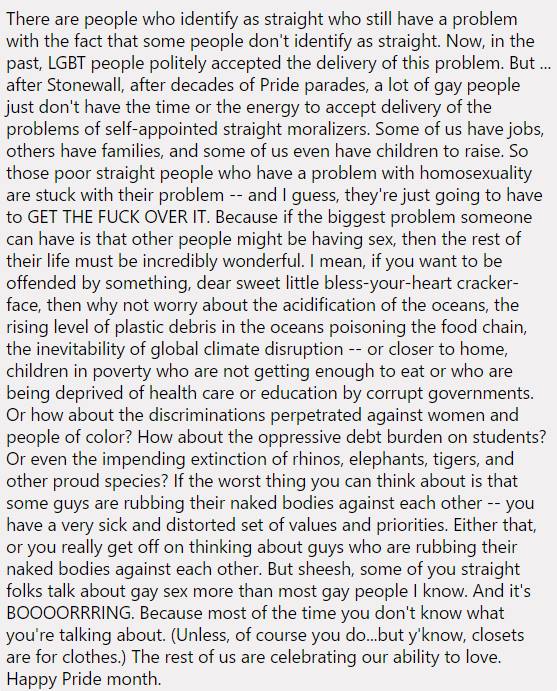