By Mark L. Blackman: On the evening of Wednesday, July 19, the monthly Fantastic Fiction Readings Series hosted authors Genevieve Valentine and Karen Heuler at its venue, the Red Room at the 2nd floor KGB Bar in Manhattan’s East Village (“red” in both senses, the walls’ color and the Soviet era-themed décor).

The event opened, as traditional, with Series co-host Matthew Kressel’s exhortation to support the Bar by buying a drink or two (at 90º and humid, hydration was definitely advisable), and announcing upcoming readers:

(All dates are the third Wednesday of the month. Details are available at the Series website,  website.) The Series, ongoing since the 1990s, is known for reliably offering an outstanding mix of writers and styles. He again thanked the Series’ loyalists for supporting its recent Kickstarter campaign (which raised about $8,900, enough to keep the Series going for another six years), and concluded by introducing the evening’s first reader.

Karen Heuler has published four novels and three story collections, and her stories have appeared in over 100 literary and speculative magazines and anthologies (a number of them Best of the Year anthologies). She has received an O. Henry Award, been a finalist for the Iowa Short Fiction Award, the Bellwether Award, the Shirley Jackson Award for short fiction (twice), and “a bunch of other near-misses.” She read from her just-released novella, In Search of Lost Time (Aqueduct Press) about a woman who can steal time and memories. (The title clearly evokes Proust.) Not greedy, Hildy “samples” a few minutes or, occasionally, hours, “just a little here and there,” storing them in jars (labeled with their circumstances) from which she sniffs (no tea, no madeleines). She is approached by a shady character (Michael P.) who tells her that there is a market for time; the dying, of course, want more time, and she herself is undergoing chemo for cancer of the tempora (a “totally made-up” part of the brain dealing with time). He offers to buy and threatens to steal her jars. At the same time (no pun intended, honestly!), she is accosted by a sparkly-things-favoring woman (the Bedazzler) who asks her to sift through people’s memories to find her missing daughter.

After an intermission, Series co-host Ellen Datlow took the podium and introduced the second reader of the night, author and critic Genevieve Valentine, whose most recent book is the near-future spy novel Icon (the sequel to Persona). Her first novel (she’s published four), Mechanique: A Tale of the Circus Tresaulti, won the Crawford Award and was shortlisted for the Nebula, her short fiction has appeared in over a dozen Best of the Year anthologies (and she will, incidentally, have a story in Datlow’s Mad Hatters and March Hares), her comics work includes Catwoman for DC Comics, and her criticism and reviews have appeared in The Atlantic, The New York Times, among other publications.

Valentine read “Familiaris” (which appeared in The Starlit Wood: New Fairy Tales), a piece of metafiction that was based on and shifted between a Bavarian fairy tale about “a princess who couldn’t bear children and then suddenly could” – seven sons – and a contemporary woman who regards children as wolves who eat up a mother’s life and identity. (Asked her name by a clerk, out of habit, she answers “Christopher’s mom.”) “In the story,” the princess (later queen) orders her maid to take the newborns out into the woods and let them be fed to wolves. Their royal father intercepts her and they are raised secretly in the village, fated to return 18 years and seven days later for revenge. It is emphatically not a paean to motherhood; indeed, in her concluding remarks, Datlow said “Go out and multiply – or don’t.”

(Valentine’s introduction had included the line “Please ask her about the new King Arthur movie” [King Arthur: Legend of the Sword]. It was bad, she said, disappointing to hear after that build-up.)

Copies of Valentine’s Icon and Heuler’s The Inner City were for sale at the back of the room from the Word Bookstores of Greenpoint, Brooklyn (and Jersey City). 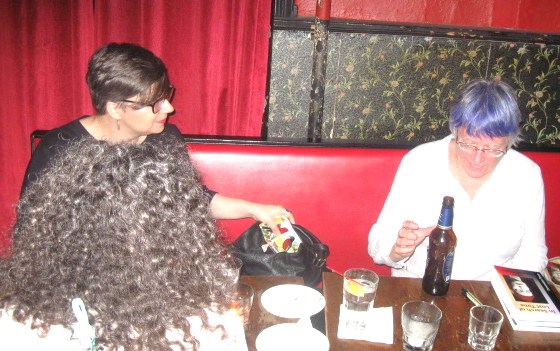 Genevieve Valentine and Karen Heuler at Fantastic Fiction at KGB.