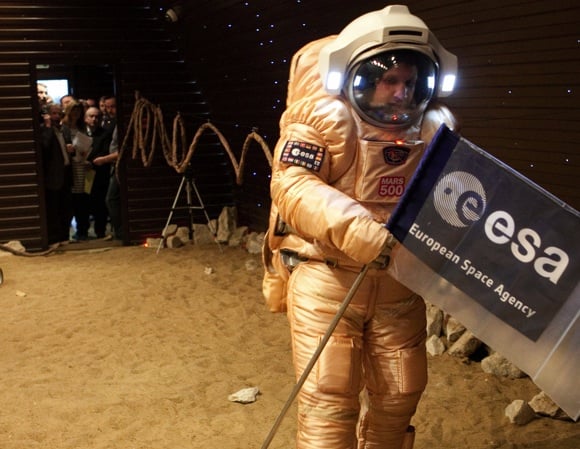 The European Space Agency’s simulated Mars mission made a successful landing, for certain values of successful, reports The Register:

Joyous news from the European Space Agency today, which reports that it has successfully landed three astronauts on Mars. Sadly this is only simulated Mars: the three spacesuited pioneers are at present exploring a large indoor sandpit, having spent the previous eight months inside a wood-panelled simulator pretending they were in transit to the red planet

An accompanying photo prompted this comment from David Klaus:

Even when you’ve already simulated the entire eight-month spaceflight to Mars, entry into the Martian atmosphere, and landing, it’s still kind of cheesy when you do your simulated EVA and flag-plant on a simulated Mars-scape, and through an open door in the simulated Martian horizon behind you there are a bunch of technicians, executives, and politicians in their shirtsleeves and business suits watching you.

It’s kind of seeing the “backstage” at The Truman Show.