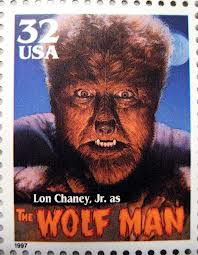 His first appearance on film was an uncredited bit part in Girl Crazy (1932). Playing Lennie Small in Of Mice and Men (1939) made him a star. He established his acting chops as Victor Mature’s caveman father in One Million B.C. (1940). Hollywood success – a contract with Universal – led to playing the lead in The Wolf Man (1941), which stamped him ever after as a horror movie actor even as it endowed him with a degree of immortality.

His grandson, Ron Chaney, often appears at cons and film-related events, for example this faux candidate debate in 2012.