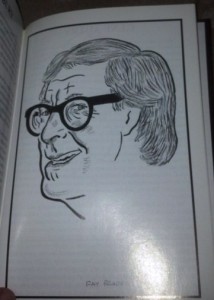 The winning bids from the Ray Bradbury estate auction have been posted. About 250 of the 460 lots sold, yielding $493,408 (including bidders fees).

That’s almost twice the money generated by the auction of Forry Ackerman’s estate in 2009.

The highest price paid for an item was $45,894 for Dean Ellis’ famous cover painting from the 1969 edition of Bradbury’s The Illustrated Man.

Sam Heller, a spokesman for Nate D. Sanders Fine Autographs & Memorabilia, told the Chicago Tribune, “I was shocked how well some of these items went.”

Bradbury’s Retro Hugo from 2004 fetched $28,734. His Saturn Award from the Academy of Science Fiction, Fantasy and Horror Films predictably attracted a smaller but still surprising (to me, anyway) bid of $2,625.

The inscribed spade that once belonged to George Bernard Shaw and the Bradbury poem it inspired sold together for $6,250.

Most items that received no bid during the auction are now being offered for immediate purchase at the asking price, including the Charles Addams painting featured in early publicity that nevertheless went unsold. It’s still available for $32,500.