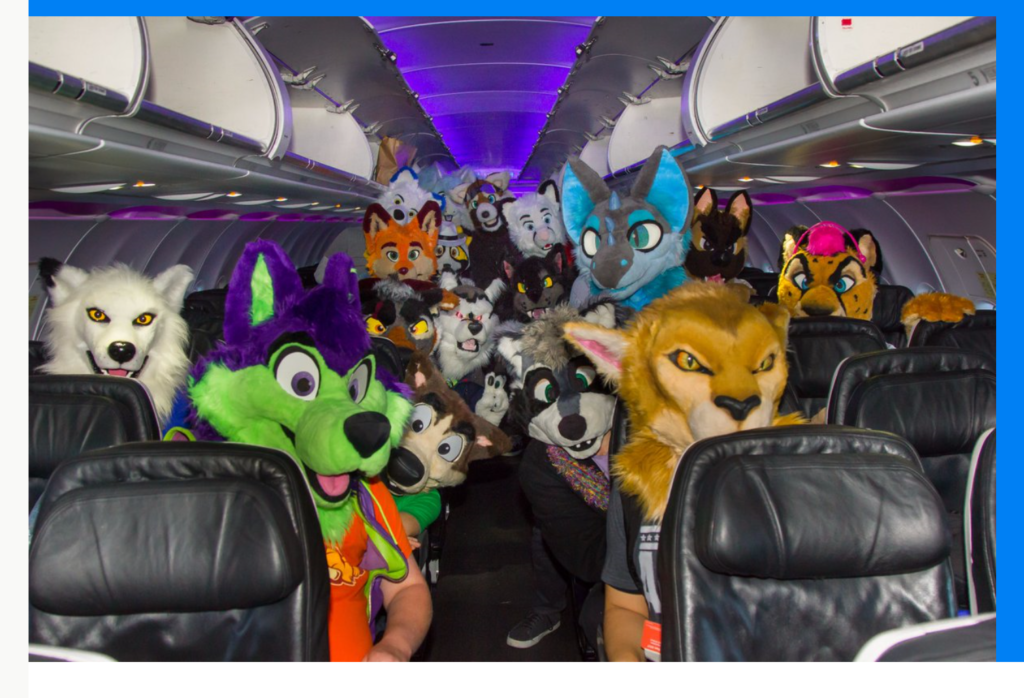 FurFlight won’t be leaving the ground again soon, if ever.

FurFlight is marketed as a way for furries to fly as a group to selected conventions, and travel in their fursonas.

Yes! Enjoy being an animal before you arrive at the convention! We have officially sanctioned costuming permitted post-security and onboard from both SFO, Boston and Seattle.

Dogpatch Press says the arrangement was successful for a group that flew to Midwest FurFest last year (“A financial fuss about FurFlight – can it fend off a fandom fiasco?”)

FurFlight bundles furries together for group air travel from highly-active fandom regions to highly-attended conventions, most notably from Seattle and San Francisco to Midwest FurFest. The idea is to improve the boring parts and the endpoint arrangements. It happened successfully in 2017.

Unfortunately, Mike Folf, the organizer and principal of Canis Vulpes LLC, which operates FurFlight, couldn’t meet expenses and reportedly was selling 2019 events to try and fund FurFlight’s remaining obligations for 2018.

Now those who signed on for the group trip to Midwest Furfest (Nov. 29-Dec.2 in Rosemont, IL) will be scrambling to cancel their reservations and make other plans.

When the story came out last week, Folf did not respond to contacts, something he has now explained in an apologetic post “Regarding Midwest FurFlight, Mental Health, and Future Trips” which says in part —

I have wronged you all and I’m sorry. This isn’t how I wanted it to be and I want to make things as right as possible for you all.

Long story short: I will work hard in early November to salvage what we can of the flights to ensure you all can go to Midwest Furfest. If this isn’t logistically possible, I will refund all guests and then some to ensure you all can book a flight to the con. If this can’t be done in time, I’ll add an extra sum to cover the damage of a lost convention time. This isn’t ideal, but it’s better than silence and doing nothing.

Also until further notice, all 2019 trips are suspended and everyone who signed up for TFF, BLFC, or FWA will be refunded ASAP.

A little transparency as to what has been going on these past few days:

On Wednesday October 24 I got an email from Alaska Airlines saying that the flights were suddenly unpaid for. That evening, the journal post came up. Overwhelmed, I spoke to the exec team about the issue and my own stress before being forced to remove telegram and social media for my own personal well being. At 11:30 that night, the police came and I was placed on Psychiatric Hold, isolated from society, until Friday October 26 due to concerns about suicidal thoughts. At that moment, I felt I had lost everything and was an emotional mess. That Friday, I was taken to a safe location for the weekend and was otherwise disconnected from the online world while I figure out with close persons what to do about the situation.

There is the idea that no matter how much good you do in the fandom, one bad slip and you’re forever reviled as an enemy. This is a mentality that I have held close to myself and have done as much as I can to cover my tail and prevent any kind of darkness from going public. Needless to say, this also prevented me from asking for help when it came to FurFlight, as I’ll detail below….

Canis Vulpes, or FurFlight, was in the red from the get go. I was still paying off the $5k debt from last year and initial set up costs would inevitably bite into the income. If we had zero operational costs, Midwest FurFlight would only garner $2.5k in profit. In reality, marketing (twitter ads and physical items that unknowingly cost upwards in the thousands) and additional set-up costs (funding for SkyCollies, setting up the network infrastructures and other formalities) took a severe bite on the funds. We had zero capital so I assumed that I could keep this within the $2.5k margin. I was wrong, and again was afraid to ask for specific help and loans due to the aforementioned furry drama mentality. I was promised a capital investment over the summer that failed to materialize which also had an effect on the marketing spending.

Prior to getting the notice from Alaska Airlines, Folf borrowed over $35,000 from Robert Johnson (“Alohawolf”), ostensibly to secure the tickets. When he recognized FurFlight’s financial situation and his own exposure, Alohawolf went public:

I wanted to ensure that the event was successful and that everyone would still make their flights. In doing so I made the mistake of trusting him; I processed $35,631 in airline tickets on two credit cards to cover all of the flights from SEA (Seattle) and SFO (San Francisco) to ORD (Chicago – O’Hare). This payment was made directly with Alaska Air and Mike supplied account information needed so I could process payments to cover the transactions.

After realizing the extent of this situation over the weekend, I realized that this is not sustainable. I began reaching out to other furs over the weekend to determine the best order of operations to proceed to start unwinding this transaction on the very next business day, which was Monday, October 22.

Currently, I’m out over $35,000. If I’m very lucky, I’ll come out whole. I have disputed the charges and made both the airline and card issuers aware of the details of the fraud. As a result, they may have begun to act to cancel the transaction and the tickets for the 2018 MFF FurFlight date.  As this case includes such a large amount of money, on the advice of a lawyer, the police and FBI both were also contacted and informed.

I am making this public statement to make those affected aware as soon as possible. For those who purchased FurFlight 2019 tickets, I highly recommend you reach out to your credit card issuer and request a refund (or use travel insurance if your card has it), as the company that sold you flights is insolvent.

And the incident prompted the Boozy Badger, a lawyer with a blog, to write a study of all the California regulations that Canis Vulpes LLC may have violated — “FurPlanet’s Furry Friday: FurryAir – At Least It’s Not Pet-Screwing” – an effective advertisement for start-ups to hire legal counsel. BB’s analysis leads to this conclusion —

I’m not saying that.

I am saying that there appears to be a situation where an LLC was formed for the purpose of selling travel, including travel to residents of California. That this LLC took a substantial amount of money from people to obtain flights to a specific event, both in and outside of California. That for some reason, whether it be exemption from the law or ignorance, this LLC did not submit a legally required registration as a Seller of Travel to the State of California. That now it appears the same LLC has confirmed that they reached out to another party to pay the debt for the travel which should have been paid with the passenger funds already submitted, as those funds are technically trust funds (not property of the seller of travel) until the travel is actually paid for entirely. That as a result, and individual paid $35,000.00 on assurances the money existed, and it apparently did not from what has been revealed. And that, in these circumstances, there is a very specific California law that, if applicable, makes this a very serious criminal and civil penalty.

I’m also saying that, while out of compliance with the law from what I can see, Canis Vulpes customers who reside in California may be able to seek restitution from a fund specifically created for this…but they may not. Likewise, customers in other states (Including, I should note, Washington) are or may be protected by similar

I am not, however, saying that money was “stolen” or anything of the sort. Idiocy and ineptitude is not the same as malfeasance, and people starting businesses screw up all the damn time.  Especially when they rely on LegalZoom instead of a real goddamn lawyer to give them advice.

Which really leads to my last lesson:

It is so fucking important top understand the legal requirements and ramifications of what you do that a lawyer, at least one to help you form and start-up your business, isn’t optional.

Alohawolf says that the other people working on Furflight were kept in the dark, too:

There is something I’d like to be clear on, per the logs, Mike kept the entire executive board for FurFlight in the dark of its true financial condition – they only found out how bad things were when I went public. #furflight

FurFlight has released its own message of apology, telling customers to request refunds of their airline tickets.

The closest thing we are going to get as far as an official statement from the furflight crew. pic.twitter.com/bCukHLW2qa

The FurFlight volunteers have released an official unofficial statement. The MFF FurFlight currently is no more. We urge all of our customers to call Alaska for their confirmation. Currently refunds are on hold, and if you have any trouble with a chargeback please contact us.

This may not be as simple as it sounds:

To clear anything up. We volunteers can not officially claim the cancellation of the flight. If you need a refund or chargeback you need to call Alaska first and get confirmation your seat has been released. At our current capacity we are not able to confirm individual seats.

Refunds are on hold because your merchant bank account is in the red.

The *only* way to get your money back is via chargebacks which are paid-out of the banks’ insurance.

Mike is going to be in a *lot* of trouble. https://t.co/ucHU4rJRVx

[Thanks to ULTRAGOTHA for the story.]