The Los Angeles Science Fantasy Society held the grand opening of its new clubhouse in Van Nuys on September 1.

I went early to scout out the parking, and reached the clubhouse around 6 p.m., in time to greet Karl Lembke and Christian McGuire on my way. I paid my dues to treasurer Elayne Pelz and followed registrar Michelle Pincus on a guided tour of the new place.

The clubhouse occupies a block-long commercial building formerly divided between several businesses. In the new configuration there is a large meeting area with an enclosed office to one side, a spacious socializing area, and a big section for the club library. There are other substantial nooks and crannies that will be used for storage or to place things like the soda machine where they won’t be in the way. And there’s a full kitchen.

LASFS held a potluck dinner, and Eylat Poliner did heroic labor on the set-up. Fans brought cuisine from four continents and Brooklyn (George Mulligan explained at length that corned beef and cabbage is not a native Irish dish).

At 8 p.m. there was a surge toward the meeting room. Marcia Zeff called things to order. Karl Lembke took his post as secretary. I had made a strategic choice to stay in the socializing area during the potluck rather than stake out a seat at the front of the meeting (without which I couldn’t hear what was going on), so I didn’t stay through the formal part of the meeting.

The main drawback of the new place is the minimal parking available in the immediate neighborhood – Arlene Satin told me there are 17 spaces. Curbside parking on Aetna to the west is problematic because city signs forbid it between 9 p.m. and morning – no problem if you’re willing to leave the meeting early. Halfway up the same block is an entrance to a vast Metro park-’n-ride lot – where signs threaten those who aren’t transit customers that their cars will be towed. I expect, in the era of ubiquitous surveillance cameras, it wouldn’t take long for somebody to notice a bunch of people leaving their cars at the far end of the lot then walking away from the bus depot. However, these may not be insurmountable problems and the club will try to work with the city for change.

Inside it’s certainly a nice space for the club’s needs and I’m looking forward to seeing it again once they’re fully moved in.

[Thanks to Marty Cantor for the photos.] 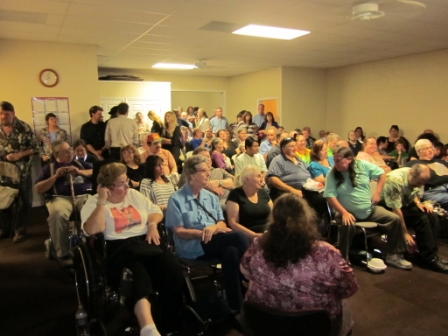 Marty Cantor: “This particular photo was taken just as the meeting was about to get under underway and I was standing just to the west of the podium, looking to the back of the room which is the entryway to the socializing area and the library.” Front row (L toR): June Moffatt (in blue blouse), Barbara Harmon, Lee Gold (back to camera). 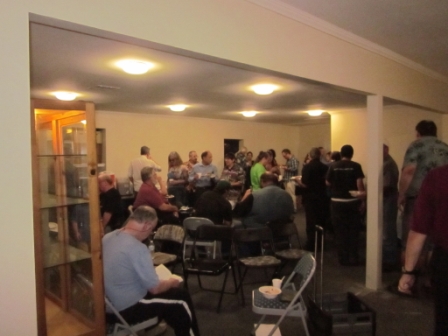 Marty Cantor: “This is a photo from the entrance of the meeting room to the socializing area. This was taken before the area got packed with people.” Barry Gold (foreground, in gray); just past Barry’s head, Mike Glyer (in burgundy); in center, John Hertz talking to Genny Dazzo; behind John on left, Sandy Cohen. 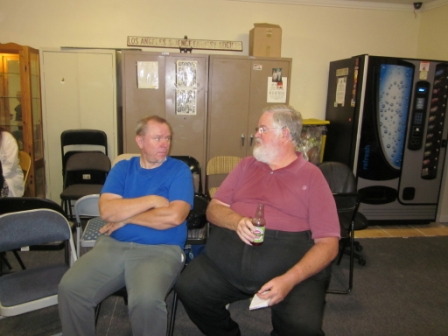 Marty Cantor: “And here is the proof, you dirty dog, that you were at the meeting, obviously besmirching the name of the photographer to a credulous Marc Schirmeister.”