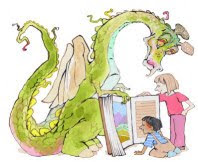 Flying Dragon arguably has more than one specialty. While some characterize it as a children’s bookstore, it’s also where people connect with the latest YA fantasy and general fantasy novels.

The store has often been in the news since it opened in 2005. Last year Quill and Quire praised its window display for Guy Gavriel Kay’s new book, Under Heaven:

As you can see, the display includes not only Under Heaven, but other mythologically minded or otherwise thematically linked titles. A new Kay tome lifts all boats, after all. The CBA Libris Awards will be presented on May 14 in Toronto. The full list of categories and nominees is here [PDF file].