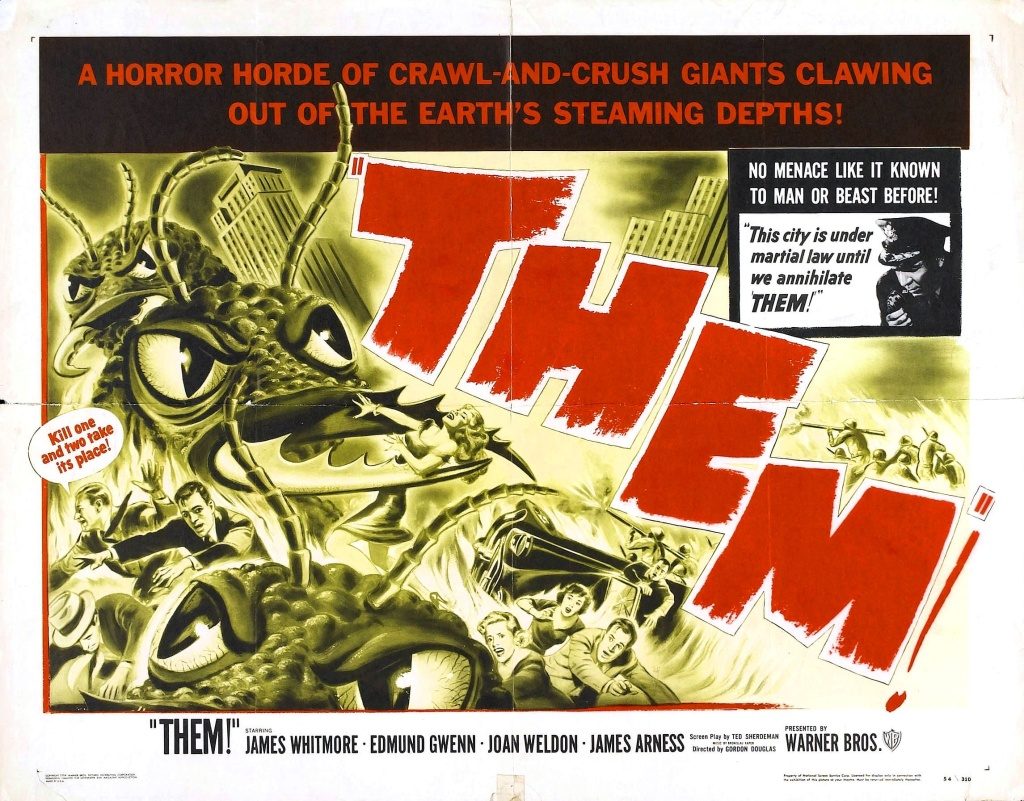 By Carl Slaughter: Them! is a forgotten classic science fiction movie.  Despite a premise involving ants mutated into giants and spreading rapidly, this is not a typical creature feature.  The insects make few appearances and are on screen briefly.  Killings mostly occur off screen, happen quickly when they are shown, and don’t involve gore.  No, this is a true science fiction story.  Part detective, part exploration, part hunt.  The scientists provide scientific background through interaction with military and law enforcement personnel during strategy sessions and battles rather than resorting to info dumps.  The New York Times called it “taut science fiction.”  Variety called it a “top notch science fiction thriller.”  The closing line is, “When Man entered the Atomic Age, he opened the door to a new world. What we may eventually find in that new world, nobody can predict.”  Rotten Tomatoes approval ratings is 100%.  Nominated for an Oscar for special effects.

The Thing from Another World is another forgotten science fiction movie.  Based on “Who Goes There?,” a novella by John Campbell.  Scientists and soldiers discover a crashed alien with hostile intent and learn the hard way how intelligent, strong, and adaptive he is.  Turns out the alien is vegetable based and carnivorous, feeding on blood.  After several misfires, a few casualties, a failed attempt to establish a relationship, severe damage to the station, and numerous science-military agenda disputes, they finally outsmart him.  The alien shows himself to the crew only twice and briefly both times.  Instead, they have to follow his trail of activity.  Ends with, “Tell the world. Tell this to everybody, wherever they are. Watch the skies everywhere. Keep looking. Keep watching the skies.”  Beat all other science fiction films at the box office, including Invasion of the Body Snatchers and When Worlds Collide.  Lester del Rey described it as “just another monster epic, totally lacking in the force and tension of the original story.”  Time Magazine chose it as the best sci-fi film of the 50s.  Dialog is rapid and crisp, so you might even want to watch a subtitled version.

The Thing is a remake of The Thing from Another World.  This screen version is closer to the print version.  After the success of Alien, Universal executives were convinced commissioning The Thing was a good call.  They miscalculated.  Alas, John Carpenter couldn’t compete with Steven Spielberg.

If all this wasn’t enough, 1982 was a year cluttered with speculative fiction, including Poltergeist, Wrath of Khan, Tron, Conan the Barbarian, Blade Runner, and Road Warrior.

The fallout for Carpenter was severe.  Universal bought out his contract, thus he lost a chance to direct Firestarter.  The Thing was panned by critics, but has since been rehabilitated and has gained a cult following.