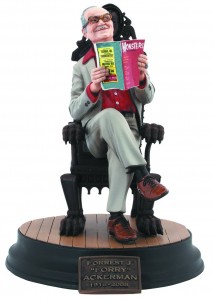 Beethoven probably never got his own action figure either… Not that Forry moves, just the same, Dark Horse Comics’ Forry Ackerman statuette is an instant front-runner for next year’s Rondo Awards in the Best Toy, Model or Collectible category —

Forrest J Ackerman, commonly known to fans as “Forry”, comes to life in this colorful 13″ tall statue. Forry was the creator, editor and principal writer for Famous Monsters of Filmland, a magazine that influenced generations while spreading the love of the horror genre he was also known for his “Ackermansion,” a sprawling house in Los Angeles that held his extensive horror book and memorabilia collection. For fifty years, Forry shared his collection with fans during open-house events. As an agent, writer, editor, and actor, he had far-reaching influence in the science fiction, horror, and fantasy community. The statue includes a nameplate on the base with one of Forry’s most popular nicknames, “Dr. Acula.”

And think how cool it would be if LASFS bought a batch of these to give its Forry Award winners (instead of the nothing they get now.)