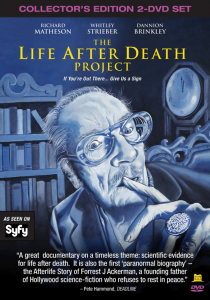 Never mind that Forry disbelieved in any afterlife, Paul Davids’ The Life After Death Project analyzes the strange occurrences that some have interpreted as Famous Monsters founding editor — and one of Paul’s best friends — Forrest J Ackerman reaching out to communicate from beyond the grave.

Too bad I didn’t have this news before the documentary aired on Syfy tonight but all is not lost — the producer will happily sell you a copy of the DVD. In the meantime, sample this 8-minute intro video:

5 thoughts on “Forry Tapping at His Chamber Door?”