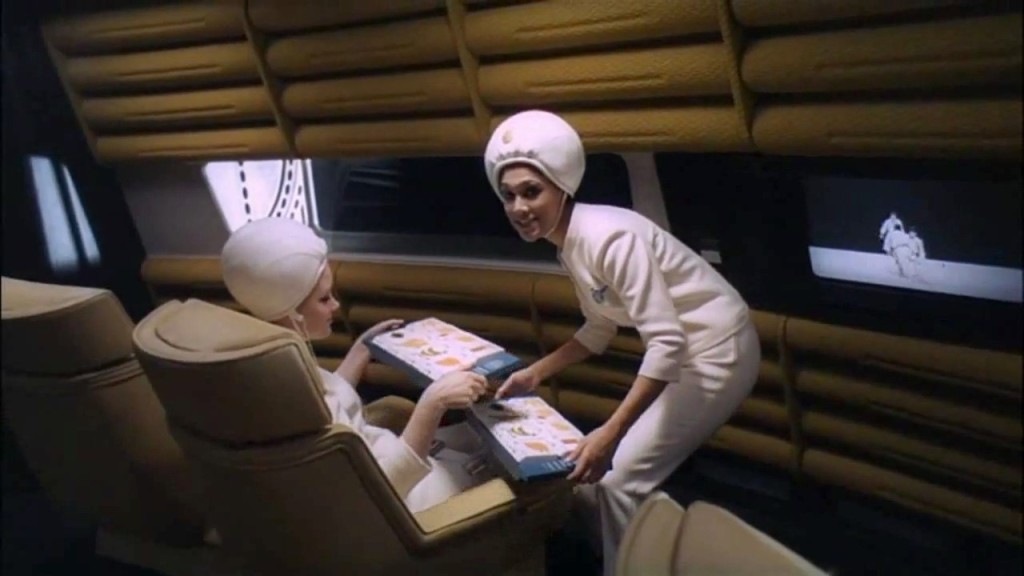 While I don’t know what they served for dinner on the fictional Pan Am passenger rocket in 2001, the year the movie was released Pan Am was serving lobster thermidor aboard 747’s in the upstairs dining room. When it comes to meals real people have eaten anywhere from zeppelins to the International Space Station, Richard Foss’ Food in the Air and Space: The Surprising History of Food and Drink in the Skies can tell me anything I want to know.

This book is the first to chart that history worldwide, exploring the intricacies of inflight dining from 1783 to the present day, aboard balloons, zeppelins, land-based aircraft and flying boats, jets, and spacecraft. It charts the ways in which commercial travelers were lured to try flying with the promise of familiar foods, explains the problems of each aerial environment and how chefs, engineers, and flight crew adapted to them, and tells the stories of pioneers in the field. Hygiene and sanitation were often difficult, and cultural norms and religious practices had to be taken into account. 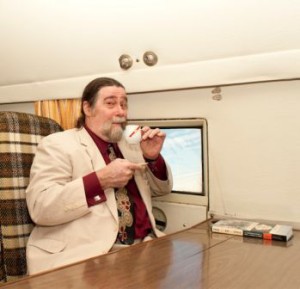 Foss’ command of details and gifts as a raconteur are also on exhibit in a related blog filled with the interesting information that didn’t fit in his book.

That’s where fans of steampunk will go to mine authentic details about dining on zeppelins or aboard WWI biplane bombers converted to passenger service after the war. What may surprise them most, though, is Foss’ revelation that in the Sixties an airline created a whole proto-steampunk marketing strategy —

In my book I mentioned a promotion that was a triumph of making lemonade when life gives you lemons – the period from 1960 to 1962 when New York-based Mohawk Airlines was flying from Albany to Buffalo with DC-3s that really should have been in museums. After passengers complained about the outdated aircraft, some marketing genius decided that if they were struck with old airplanes, they might as well decorate them to look even older. Someone looked at pictures of old railroad cars, measured the aircraft for lace headrest covers, gold-filigreed wallpaper, and Victorian curtains, and “Gaslight Service” was born.

The theme was applied brilliantly – Stewardesses dressed like dance hall ladies passed out cigars, pretzels, and beer, and the airline schedules carried the warning that passengers should close the windows when going through tunnels. It was a wonderfully silly promotion that worked brilliantly; suddenly passengers wanted to fly the previously scorned airplanes instead of their faster rivals.

The Sixties were the pinnacle of passenger airline dining and naturally more fun to read about than the practices of today’s cattle car airlines, although Foss covers that trend, too. Here are some facts he mentioned when interviewed by Easy Reader News.

Robert Crandall, the president of American Airlines, in a decision that became known as “Crandall’s olive,” ordered a reduction in the number of olives in the airline’s salads, for an annual savings of $40,000. 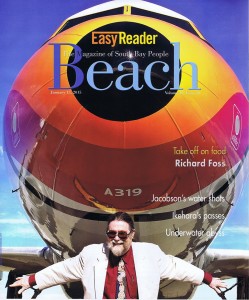 Gone is the TWA Banana Brunch Cake. And gone, too, is the early Space Age which gave us Astronaut Fruitcake and Tang and Cool Whip Pie. However, you can make them yourself by following the recipes in the back of Food in the Air and Space.

Foss will be signing his book January 29 (tomorrow) at Pages Bookstore in Manhattan Beach at 6:30 p.m. He’ll follow with a talk about airline food. Pages is located at 904 Manhattan Beach Boulevard.