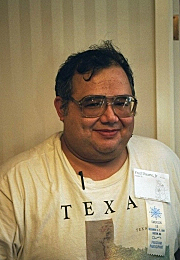 Fred Duarte, Jr. who died October 3, was one of the many Texas fans who have worked hard to earn their region an enviable reputation for hospitality.

I remember as fan GoH at Armadillocon 11 in 1989 that Fred and con chair Karen Meschke, to whom he was married, collected me from the airport and gave me a view of the Texas capitol illuminated by night as we made our way to the hotel.

Also, George Alec Effinger gave them a shout-out in the dedication of The Exile Kiss — “And special thanks to Fred Duarte and Karen Meschke for hospitality above and beyond the call of duty, while my car was in a near-fatal coma during the writing of this book.”

Fred found fandom in 1981when he moved to Austin from Kansas City. He met Robert Taylor and Willie Siros after seeing an ad for ArmadilloCon in the back of Analog. His first Worldcon was ConStellation in Baltimore (1983).

He contributed to Pat Mueller Virzi’s fanzine Pirate Jenny. He also helped with the hotel contract and negotiations for Corflu Quire (2006), hosted in Austin by the Fandom Association of Central Texas.

Late in life he was fan guest of honor at the 2011 Armadillocon.

Fred’s passing shocked Pat Cadigan – as she wrote on Facebook:

In mourning for Fred Duarte until further notice.

Fred asked me to be the Toastmsster at ArmadilloCon, back in the day. It was my first ever TM gig and ArmadilloCon was a great place for it.

I’m sorry, this news has really shaken me. Today is cancelled. 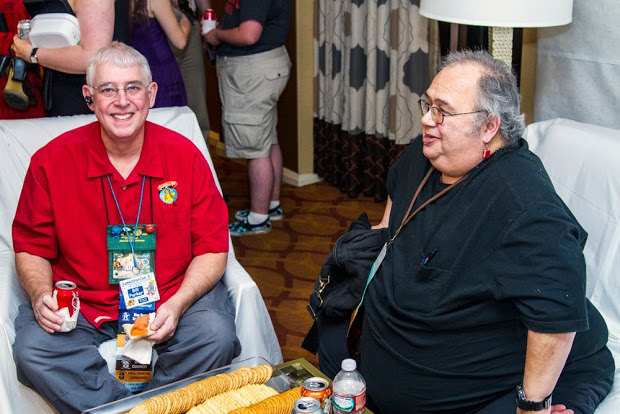 3 thoughts on “Fred Duarte Passes Away”