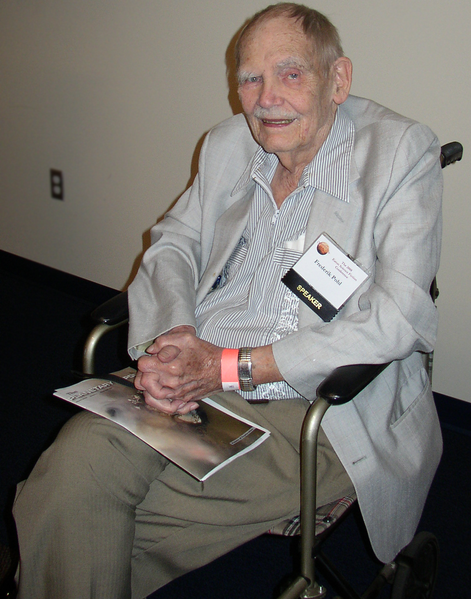 Frederik Pohl died September 2, his daughter Emily Pohl-Weary has announced on Twitter.  He was 93.

He spent the last several years of his life writing The Way the Future Blogs, fashioning the pieces from which a new volume of his memoirs might be made — in the meantime so charming the latest generation of science fiction fans with his anecdotes from the genre’s golden age that he was voted a Best Fan Writer Hugo in 2010.

Pohl himself had started out in sf as a teenaged fan – not without controversy, for he was one of the six Futurians who were thrown out of the First Worldcon in 1939. The scales of justice would balance later when he was named guest of honor at the 1972 Worldcon, L.A.Con I.

Pohl was also one of the field’s youngest prozine editors, from 1939 to 1943 running Astonishing Stories and Super Science Stories.

He served in World War II as an air corps weatherman, mainly in Italy.

After the war he ran the genre’s leading literary agency – yet it was not financially successful. He closed it down in the early 1950s and went back to writing full time.

He co-founded the Hydra Club in 1947, a regular gathering of New York’s sf pros.

A satire written in collaboration with Cyril M. Kornbluth, The Space Merchants (1953), was one of his most noted works in this period. They followed in 1955 with Gladiator-at-Law.

Pohl was President of the Science Fiction Writers of America in 1974.

He is survived by his wife, Elizabeth Anne Hull, Ph.D.

[Thanks to Lloyd Penney and Taral Wayne for the story.]