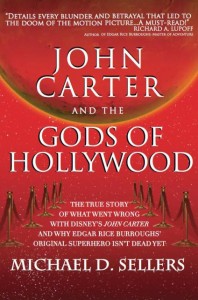 Actually, John Carter and the Gods of Hollywood will be free in the Kindle edition until February 7 at midnight (PST).

A Timeless Classic Becomes a Hollywood Calamity of Historic Proportions
It took 100 years to bring Edgar Rice Burroughs’ John Carter of Mars to the big screen. It took Disney Studios just ten days to declare the film a flop, withdraw it from distribution, and lock it away in the Disney vaults. How did this project, despite its quarter-billion dollar budget, the brilliance of director Andrew Stanton, and the creative talents of legendary Pixar Studios, become a calamity of historic proportions?

Michael Sellers, a filmmaker and Hollywood insider himself, saw the disaster approaching and fought to save the project – but without success. In John Carter and the Gods of Hollywood, Sellers details every blunder and betrayal that led to the doom of the motion picture – and that left countless Hollywood careers in the wreckage.

John Carter and the Gods of Hollywood is a must-read for every fan of John Carter and Edgar Rice Burroughs, and every film buff intrigued by the “inside baseball” aspects of modern Hollywood.

[Via Boing Bong, thanks to John King Tarpinian for the link.]