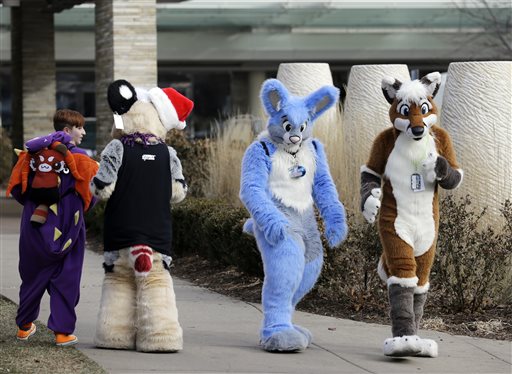 Nineteen people were treated at local hospitals and thousands of guests evacuated from the Hyatt Regency O’Hare including furries in costume who were present for the MidWest Furfest.

The Associated Press reports the source of the gas was chlorine powder left in a 9th floor stairwell according to the Rosemont Public Safety Department. Investigators believe the gas was created intentionally and are treating it as a criminal matter.

Guests were allowed to return a few hours later after the hotel had been decontaminated, and by mid-morning the furries were pouring back into the hotel for more activities, chat with each other and make their way to a outdoor courtyard where they took part in a group exercise session, with foxes, dragons and other characters getting an aerobic workout.

“We ask you to continue to be patient, and remember that the volunteers who make Midwest FurFest happen intend to give 110 percent to make sure that the fun, friendship, and good times … overshadow last night’s unfortunate incident,” organizers said in a statement posted on the group’s website. Organizers declined to discuss the matter in person.

At approximately 12:40 a.m., first responders were called to investigate a “noxious odor” at the Hyatt Regency Hotel in Rosement, which was hosting the Midwest FurFest. The Rosemont Public Safety department was called in and found a high level of chlorine gas in the air.

Authorities immediately ordered all the convention-goers — many of whom were in anthropomorphic animal costumes — to exit the building. They were not allowed to return until almost 4 a.m.

[Thanks to Francis Hamit and Taral Wayne for the story.]

Update 12/08/2014: Corrected name of event to Midwest Furfest. (Something I read gave me a thoroughly mistaken impression that Midwest Furfest was a local iteration of a movable con by the other name.)