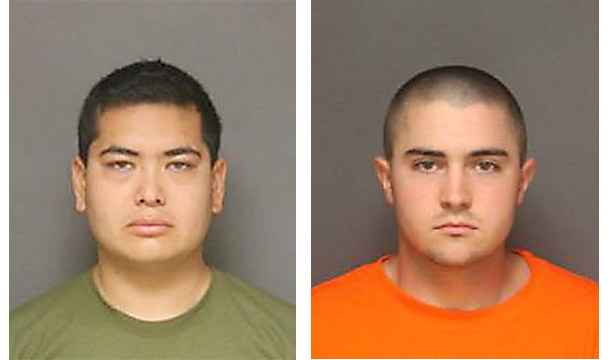 Frank Felix, 25, Sun Valley and Josh Acosta, 21, Fort Irwin, have been arrested in connection with the three murders that occurred September 24 in Fullerton.

Four people associated with a triple homicide in Fullerton (CA) on September 24 were involved in the Southern California furry community reports the Orange County Register — one of the victims, two men charged with the murder, and an unnamed teenager who may also be charged.

Christopher Yost, 34; his wife, Jennifer Yost, 39; and their friend Arthur Boucher, 28, were found dead in the Yost home in Fullerton on Saturday morning. Two of the couple’s daughters, ages 6 and 9, were home when police arrived. The younger girl alerted police by calling 911, saying their parents had died.

On Sunday morning, police arrested Frank Felix, 25, of Sun Valley; Joshua Acosta, a 21-year-old U.S. Army mechanic based at Fort Irwin; and a 17-year-old female on suspicion of murder.

The trio were arrested after police had asked for the public’s help in finding Jennifer Yost’s missing daughter, Katlynn, who is 17.

Katlynn Yost was located, but police said state law prevents them from saying whether she was the arrested teenager.

According to reports from KTLA, the teenager is expected to face murder charges as well.

Katlynn, known on the OC Furry Facebook Fan Page as Daydreamer, was reported to the group as missing on Sunday.

“A lot of people in our community were devastated,” said Christopher Parque-Johnson, 23, of Garden Grove, an artist, performer and videographer for the SoCal Furs, which has members from San Luis Obispo to San Diego. “I’ve been hearing from a lot of people. It bothered everybody.

“It makes no sense.”

“All of them were always nice to everybody,” said Parque-Johnson, known in the furry community as Bandit, a raccoon inspired by the film “Over the Hedge.”

The Los Angeles Times carried details of the charges against the two men arrested in the murders.

A soldier in the U.S. Army and another man were charged with murder Tuesday in connection with the slaying of a Fullerton couple and their friend over the weekend, according to authorities.

Prosecutors also charged Acosta with a sentencing enhancement because he used a firearm, according to the district attorney’s office. Both men have been ordered held without bail. If convicted, the men face a sentence of at least life in prison without the possibility of parole.

Parque-Johnson also told the Orange County Register quite a bit of background about furries which was published in the article.

Parque-Johnson said he knew the two men and Katlynn Yost, who identifies herself as a furry on her Facebook and Twitter accounts, but did not associate them with one another.

“We’ve never seen them huddled together,” Parque-Johnson said. “We didn’t know them as friends of each other.”

Parque-Johnson said he was closest with Jennifer Yost.

“People looked up to her,” he said. “A lot of people cared about her.”

Joshua Acosta and Frank Felix were helpful in setting up and breaking down weekend events, Parque-Johnson said.

“They were trying to be outstanding citizens,” Parque-Johnson said.

Furries have been around since the 1980s. They admire anthropomorphic animals – characters that walk on two feet and speak like humans. Most of them are “non-suiters,” meaning they don’t spend $1,000 to $5,000 or more on full-body animal costumes. Instead, they create characters and wear badges with their characters displayed.

Parque-Johnson said furries have been unfairly characterized in the media as a group of sexual deviants. Sexual activity involving some people in furry costumes has happened in the three-decade history of the furries, according to media accounts.

“If we see it, we don’t allow those people back,” Parque-Johnson said. “We feel that behavior would be very inappropriate in our group. We think that is very weird.”

The furry community comprises mostly adults under 30, although there are some older furries who were fans of Disney movies involving animals with human characteristics such as in “Robin Hood.”

“People come to us to get away from the negative stuff in life,” he said.