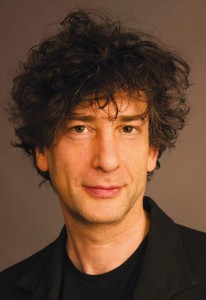 Given a choice of excerpts to quote in this post, I naturally chose this one —

On the story ‘The Man Who Forgot Ray Bradbury’

I wanted to write a story for Ray Bradbury for his 90th birthday. And I started just thinking, what if I had forgotten Ray? What if I could sort of remember his stories but I’d forgotten him, I couldn’t remember his name? What if forgetting his name meant more than that? The act of forgetting him meant that perhaps he was becoming forgotten by the world. That all led me into to the idea of just writing a monologue, essentially, by a man who forgot Ray Bradbury and was just desperately trying to remember him.

The interviewer also tries to pin down Gaiman about writing a sequel to his popular 2001 book American Gods. He dances, but in the end he says he will.