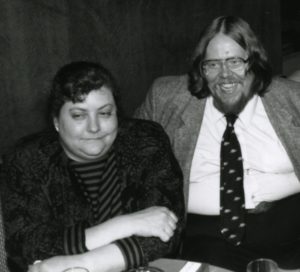 Susan Casper and Gardner Dozois. Photo by and (c) Andrew Porter. Casper and Dozois were married 47 years; she passed away in February 2017.

Gardner Dozois (1947-2018), one of the sf genre’s leading editors for over forty years, died May 27 “of an overwhelming systemic infection.”

As a well-known writer, and also the editor of Asimov’s and a popular series of best of the year anthologies, he received many honors and awards during his career. Dozois won 15 Best Professional Editor Hugos, and a 2014 World Fantasy Award as the co-editor (with George R.R. Martin) of the anthology Dangerous Women. He was the editor Guest of Honor at the Millennium Philcon, the 59th World Science Fiction Convention in 2001.

Before taking over the editor’s chair at Asimov’s he was an acclaimed fiction writer who received 11 Nebula nominations, winning twice – “The Peacemaker” (1984) and “Morning Child” (1985).

Dozois was inducted to the Science Fiction Hall of Fame in 2011.

Prozine editors who plan on being around for awhile don’t just pan for nuggets in the slushpile, they spend a lot of time turning the dross into gold. Gardner Dozois’ efforts along that line during his 20 years as editor of Asimov’s Science Fiction are represented in the 35 linear feet of letters and notebooks plus 35,000 e-mails that make up the archive of his correspondence and papers acquired by UC Riverside’s Eaton Collection in 2014.

Here are some of the tributes posted in the past 24 hours, and also some excerpts from my 1989 and 2001 Worldcon reports that give windows into his popularity and history. 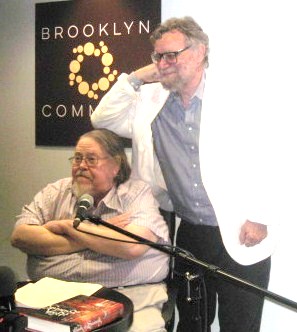 Gardner Dozois and Michael Swanwick at the NYRSF Reading in October 2017. Photo by Mark Blackman.

Michael Swanwick introduces us to “The Gardner Dozois You Didn’t Know You Knew”:

Anybody who was ever praised by Gardner Dozois should know this: He meant it. Not only did he like you personally, but he loved your work.

The second part of that mattered more than the first. I remember once he told me he’d picked up a story by a notoriously unlikeable writer for the Year’s Best Science Fiction. “That’s interesting,” I said.

Gardner was himself an extremely fine writer. If you haven’t read “A Special Kind of Morning,” do yourself a favor and look it up. It’s the apotheosis of science fiction war stories. He almost entirely gave that up when he became an editor because editing uses the same inner resources that writing requires.

He knew this would happen when he first became editor of Asimov’s. But he felt it was a price worth paying because it enabled him to buy stories nobody else would. Some of them most readers now would be astonished to learn were ever deemed unpublishable. There were times when he risked losing his job to publish a story he admired.

He paid the price. He did it for the writers… and for the readers.

…long before he’d published my work, he’d nurtured my career, including my stories in the copious honorable mentions appendices to his longrunning, definitive Year’s Best Science Fiction anthologies, appending encouraging personal notes to the rejections I got from Asimov’s and, on a memorable occasion at Philcon, announcing during a panel that he viewed me as one of the best new writers in the field.

In a field where beginning writers are starved for attention, critical feedback and encouragement, Dozois stood out as an editor who never succumbed to the laziness of simply publishing works by known authors: he was an assiduous reader of the “slushpile” of unsolicited manuscript, which made him an encylopedic guide to emerging talents, long before people were publishable. Beginning writers, years before their first sales, often found themselves meeting Dozois at conferences, only to be treated to specific, encouraging words about the stories he’d rejected and their professional and artistic progress.

…Eight days ago, Dozois’ son Christopher Casper accepted the Science Fiction Writers of America’s Solstice Award for lifetime achievement on his father’s behalf. Dozois apparently told his son to say that the award belonged properly to the writers that Dozois had published. Thankfully, Christopher defied his father and used the opportunity to remind us of Dozois’ shyness and modesty.

When Philadelphia Magazine named him one of “Philadelphia’s 100 Smartest People,” he said, “If that’s true, then God help Philadelphia!” When he was placed in the Science Fiction Hall of Fame, he returned from Seattle to report that they’d placed his name and image on a brick which went into the Hall of Fame Wall. “So now I’m really just another brick in the wall.” And when he couldn’t make it to Pittsburgh for the Nebula Awards Weekend, he told Christopher to just say that the award properly belonged to all the writers he’d published.

The world is already a sadder and less merry place without Gardner Dozois. I will always cherish the Liar’s Panels he used to do at Worldcons, where he and other veteran pro editors would dispense deliberately terrible advice to authors trying to get published. (‘Send lots more dinosaur stories!’)

At the SFWA Blog: “In Memoriam – Gardner Dozois”.

Gardner was always larger than life – a little loud, a little bawdy, and always the biggest presence in the room. But he also knew his stuff, backwards and forwards, and his mark on the genre is written in indelible ink. I’m so glad SFWA got a chance to honor him while he was still around to appreciate it — but I sure wish he’d had a lot more time in which to do so.

From File 770’s 1989 Worldcon report: Dozois made a memorable entrance with the other Hugo nominees prior to the 1989 ceremony:

I got to the door and heard our processional music was “March of the Gladiators” from Spartacus or something comparable with brassy flourishes and rhythms suited to the stride of captured war elephants.

We walked circuitously through the auditorium like extras in a Hercules movie. Nominees in the professional categories marched at the end. Gardner Dozois basked in the applause, flashing a V-sign at the crowd like Winston Churchill on V-E Day.

…Janice Gelb was irate that the true nature of the “Liars Club” panel had been blabbed by a participant and quoted in the daily newzine. David Hartwell had said, “Did you hear we’re roasting Gardner Dozois? Think he’ll be able to feed the whole crowd?” Everyone involved had been sworn to secrecy in an attempt to surprise Dozois.

… The Liar’s Club: The popular panel truly lived up to its name this year. Pat Cadigan, Gardner Dozois, Janice Gelb and George R.R. Martin were on the dais at the beginning. Dozois got everyone’s attention with a drill sergeant’s yell, “Shut uuuupp!” Janice Gelb moderated, later saying she was mainly there to keep Gardner from taking over the microphone for a rebuttal once she revealed that the panel was actually “The Secret Roast of Gardner Dozois.”

Hearing that, Gardner shouted, “My pager went off – bye!” Janice merely explained, “We wanted to get a rubber mallet and hit him every time he interrupted.” Gardner sneered, “You think rubber would stop me?”

George R.R. Martin claimed to avoid duplication that they had simply divided up the Gardner stories. He’d been allowed to tell the story about Gardner’s knob – which George had never touched – and also about Gardner’s nose for stories. When George met Gardner for the first time, at Disclave in 1974, Gardner had a red jelly bean in his nose. George told him, “Most people put those in their mouths.” In reply, Gardner slapped his cheek and the jellybean flew into his hand. He said, “Here, go ahead.”

…A parade of others came up to testify about Dozois. Jay Haldeman recalled that around 1971 he, Dozois and others formed a loose collection of writers who met several times a year and workshopped short stories. Dozois would bring along 35,000-word story fragments. After Jay read about 20 pages he’d think, “Say, this is just great, but nothing has happened.” His brother, Joe Haldeman, wrote a 4-page scene of a former President watching the sun creep across his yard – “Gardner loved it, of course. It was just like his.” Many years later the finished story actually sold to Omni.

… Having just watched Gardner enjoy a ribald song about himself, it was easy to believe Connie Willis’ claim that Gardner is impossible to roast because he can’t be embarrassed. She gave further examples. A Worldcon  gave out a Hugo base that looked like a toilet seat with nuts and balls attached, which began to fall apart as soon as they were given out. When Connie asked Gardner how his Hugo was holding up, he answered, “My toilet seat’s fine, but my balls fell off.” Connie also described a scene from American Pie and promised, “That wouldn’t have embarrassed Gardner….”

Then Connie recalled a dinner group at a recent Worldcon held at a round table, inspiring people to give each other names of participants in the Algonquin Round Table. Connie reported that Gardner was Alexander Wolcott, “Because he’s so funny, and such a wonderful host.” Then, Connie launched into four or five sentences of effusive, frankly honest praise about Gardner’s human qualities. Gardner squirmed and blushed. Connie finished with a triumphal grin, “And now I’ve embarrassed you!”

…[Joe] Haldeman remembered an old Worldcon party. “Gardner invited me to a party back at his place. He stole a bottle of wine from the SFWA suite….” Gardner protested, “You were President!”

Haldeman ignored him and went on to talk about Dozois the editor. “John W. Campbell used to smoke unfiltered Camels in an ivory holder – the only vice that Gardner doesn’t have.” Haldeman complained that after he sent Gardner The Hemingway Hoax, Gardner “cut it to shreds so he could run it as a novella in Asimov’s. He did so much damage to it that it won both the Hugo and Nebula.”

After much more was said about Dozois, he was allowed his rebuttal. Gardner began by verifying how far he could fire a jellybean out of his nose. (Kathryn Daugherty happened to be carrying a bag of pineapple jellybeans which she donated for ammunition.) Then he told a long, risque anecdote about a closed party at the 1974 Worldcon, implicating George R.R. Martin, the Haldeman brothers and some others. Even back in the Seventies this stuff was pretty wild.

Something that struck me personally about this story was how it fit together with my memories of Norm Hollyn (then Hochberg) and Lou Stathis at the 1974 Worldcon taking me to look for some pros they’d met – Dozois being the only name I recognized at the time. What I remembered about that morning, including the hushed secrecy about someone having slept in the closet, fit perfectly with the story Gardner was telling at the end of the roast. Evidently, Norm, Lou and I had shown up the morning after all this had happened….