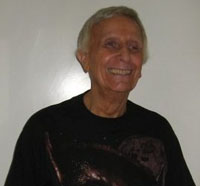 Howling author Gary Brandner, who published more than 30 novels and over 100 short stories, died September 23 of cancer of the esophagus

The Howling, the first novel in his werewolf-themed trilogy, was adapted as motion picture in 1981. Directed by Joe Dante, it launched a multi-film horror franchise.

Brandner worked on the screenplay for the second film in the series, a maddening but profitable experience as he revealed in a 2010 interview with Dr. Gore’s Funhouse —

Were you involved at all during the early stage of production for the movie adaptation of The Howling and were the earlier drafts closer to the tone and structure of your novel?

Nope. I sold the rights for an exorbitant sum and the next thing I knew I was at the screening.

How do you feel about Joe Dante’s 1981 movie and were you disappointed that it shared little relation to your story?

Joe Dante, despite our personal differences, made a fine movie, although I might have liked to see more of my book in it. However, it has been an annuity for me, so who’s complaining.

Why did you agree to co-write the screenplay for Howling II and how come you decided not to adapt your novel of the same name?

A longish story, which I’ll abridge mercilessly. I agreed for the same reason professional writers agree to anything – money. And, sure, there was a pride of authorship involved. My first draft was lovingly true to the book. At the original story meeting: ‘Gary, this is great, but the producer would like a part for his friend Fernando Rey.’ I dutifully went home and wrote in the veteran actor. Next meeting: ‘Wonderful, Gary, but the money is coming from Spaniards, and they’d like the story to take place in Spain. And, oh yes, Fernando Rey is out.’ Okay, I bundled up my plot and my people and moved everything to Spain. Next meeting: ‘Perfect, Gary, but the Spanish money dropped out and we’re shooting on the cheap in Yugoslavia.’ Here I had to bail out since I had a book contract with a deadline approaching. They hired another writer who is responsible for what you see on the screen. I retained co-screenwriter credits which brings in a few dollars twice a year.

In years past Brandner participated in the local Vintage Paperback Show.