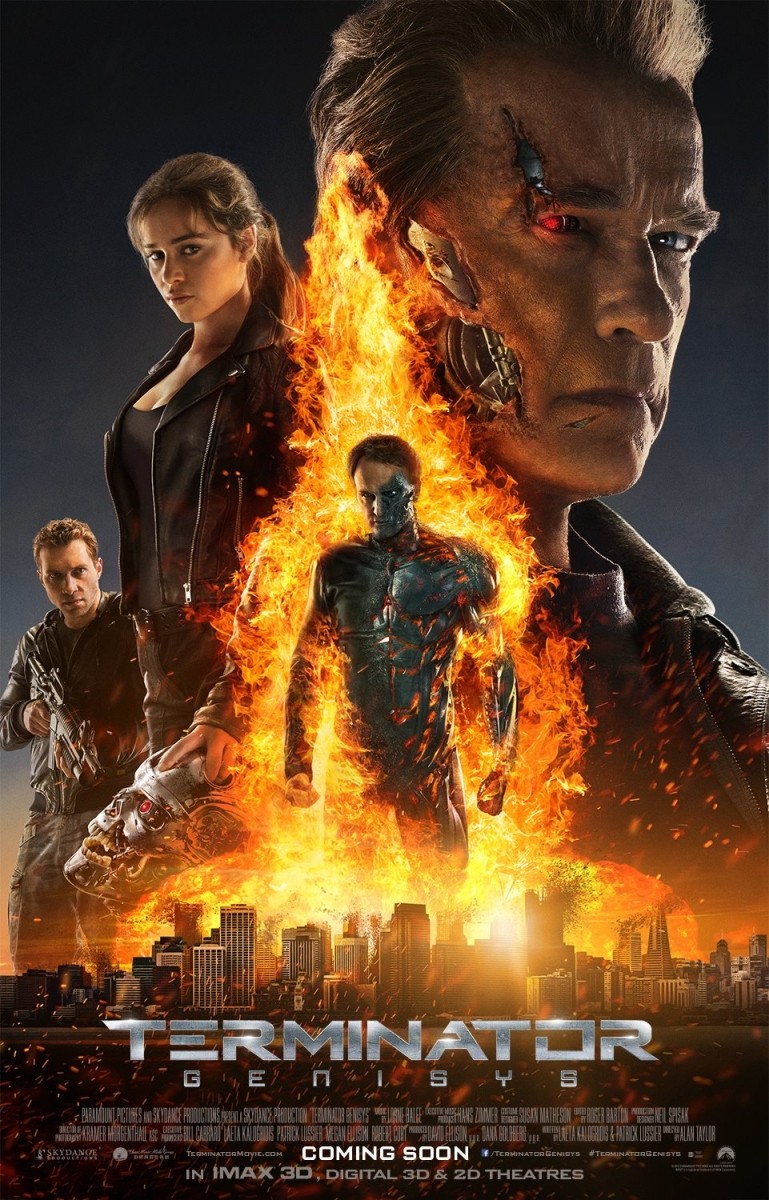 By Brandon Engel: When Schwarzenegger said, “I’ll be back,” he meant it – again, and now again.  Beginning with the first Terminator film in 1984, the franchise has steadily delivered sequels for over three decades.  The first follow up, T2: Judgement Day grossed over half a billion dollars worldwide, produced a hit soundtrack, and was nominated for six Academy Awards (winning four of them).  James Cameron, who directed the first two Terminator films, declined to participate in the next two installments: Terminator 3: Rise of the Machines, and Terminator: Salvation.  He is now adamant that the latest film in the series, Terminator: Genysis is actually the third film in the narrative of the series, even though he was not involved as director.

There’s little arguing that Terminator: Genisys lacks the thematic depth and conceptual intelligence that launched this glorious franchise. You can’t quite say that an effort wasn’t made on Terminator: Genisys, but with a hefty budget of $170,000,000, four other movies, video games, TV series (listings here), and a major theme-park ride, this singular franchise is beginning to feel a bit spent. The producers were wise to exploit the franchise’s best feature, the Terminator, Arnold himself, in all of his pre-gubernatorial glory. This alone provides satisfying entertainment.

Schwarzenegger worked hard to get back to his muscular, Terminator form, but fell just a bit too short for one of the scenes in the movie where he fights a younger version of himself. Body builder Brett Azar was brought on board, and with the help of an excellent effects company, the illusion proved successful. Schwarzenegger returned to the film because he is “very passionate” about the character.

Overall, this genesis really needed to marinate a little longer in the workroom of its creator before going live. What is different about Genysis? Producer Megan Ellison and director Alan Taylor decided to play with the timeline and completely wipe out the events of the third and fourth films, essentially giving this one a reboot, taking it back to the days of Cameron when John Connor, his mother Sarah, and Schwarzenegger’s sometimes bad, sometimes good time-traveling cyborg all play on our deepest fears: what happens if machines take over the world?

Gensyis opens with the defeat of Skynet in the post-apocalyptic future, the discovery of the cyborg’s desperate last attempt to rewrite history and humanity’s hero, John Connor, sending his second-in-command and proud father-to-be Kyle Reese back in time to save his mother, Sarah Connor. Sound familiar? Just wait. A highly unanticipated left turn lands Kyle in an alternate timeline, where multiple Terminators have been sent throughout Sarah’s timeline. One such terminator is an old-school T-800 model, Arnold of course, who has been reprogrammed by an unknown source and also sent to protect her. Things get a little crazy when another twist happens and John Connor becomes the bad guy.

The notion of “alternate timelines” and whether or not set events can be altered is fascinating, but it traps the story in a self-perpetuating time warp. Instead of reinvigorating a workable plotline, Genisys recycles past events and familiar dialogue and uses only so-so action sequences to try to draw our attention away from any unanswered questions and lapses in logic.

Terminator: Genisys is the first of a planned trilogy. Hopefully, they will look for ways in the following two to take some cues from some other successful sequel epics such as the Fast and Furious, which somehow (miraculously) keep us enthralled. Terminator geniuses, please stick with a more logical and thoughtful plotline, keep our beloved characters the way we love them and don’t leave us hanging on loose ends. If it is a good movie, we will be sure to return and see the next one.

Banking on the success of Jurassic World and Genisys, as well as other examples of “re-envisioned” classics, studios will undoubtedly continue to rehash more of our favorite 80’s films. With rumors of a Goonies sequel with all the original cast members and even a reboot of The Breakfast Club, it might be time to give the Hollywood remake machine a rest.

5 thoughts on “Genisys or Lysis?”