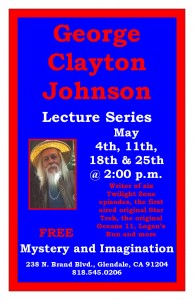 He wrote six Twilight Zone episodes, the first aired Star Trek episode, the Sinatra Ocean’s 11, and collaborated on Logan’s Run. Next, George Clayton Johnson will share his experience and wisdom in a series of lectures at Mystery & Imagination in Glendale, CA.