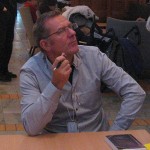 Graham Joyce, 5-time winner of the British Fantasy Award and author of the World Fantasy Award-winning novel The Facts of Life (2003), was diagnosed with cancer at around the same time as Iain Banks. Unlike Banks, chemotherapy was an option for Joyce who has been fighting for his life:

It’s very heavy medicine, in which you are carefully poisoned to within an inch of your life in an effort to defeat the multiplying cancer cells. I’ve spent the last few weeks feeling like a brick wall has collapsed on me; that and being frightened by the gaunt face of the stranger in the mirror.

And yet a glut of wonderful things too, at the same time. When I announced my illness on Facebook I hardly expected the flood of goodwill messages, letters, emails, exhortations to be strong, appreciation of my books, prayers (secular and religious), gifts and cards sent to my home – from friends and strangers alike. I felt quite overwhelmed, and if a bit tearful I blamed it on the steroids. It also made me reflect on the complicated relationship a writer has with a reader. Readers whom you think are strangers are actually on intimate terms with you and it was heartwarming to hear from so many people.

He continues with a substantial update about his career then ends:

And because you are even reading this I am tremendously moved. As for the battle: I’m fighting hard. I feel I have lots of stories left to tell. I have lived these last twenty years by my imagination. Everyone who has ever bought one of my books has helped me to do that and now that I am at a sharp point in my life I am amazed and indebted that you have made possible such a thing.

Readers are not strangers.