The hottest part of summer is just beginning, which may not be the most obvious time to start selling Christmas tree ornaments — unless you work at Hallmark, that is. 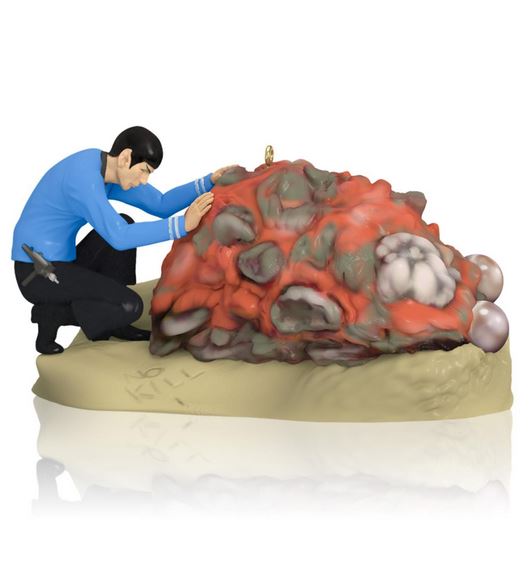 And my gosh! What fan won’t rush to pay $29.95 for a 4-1/2 inch long statuette of freaking Spock mind-melding with a blobby orange-and-gray Horta that plays a recording of the dialogue? What says Christmas more than incoherent shouts of “Pain!!” ? (At least, that’s the dialog in the YouTube clip.)

The company that wants to associate Christmas with an episode titled “Devil in the Dark” also offers the “U.S.S. Vengeance” from Star Trek: Into Darkness – it lights up with the press of a button! – for $32.95.

Lieutenant Hikaru Sulu — The versatile and reliable helmsman operates a tricorder and communicator in this ornament sculpted by Keepsake artist Anita Marra Rogers. Sulu is the fifth in a Keepsake Ornament series titled Star Trek Legends, which each year features a TOS character. The ornament is 4 ¼” high and costs $14.95.

Vina —  This limited-quantity ornament celebrates the 50th anniversary of the production start of “The Cage,” Star Trek’s first pilot. It depicts the human woman as a dancing Orion slave girl as seen by Captain Christopher Pike in a Talosian-induced illusion. Sculpted by Keepsake artist Valerie Shanks, Vina stands 4” high and sells for $14.95.

Green slave girls. What kind of person does that say “Christmas” to? Someone whose address is a mountain crag above Whoville?

3 thoughts on “Hang a Horta on Your Christmas Tree”