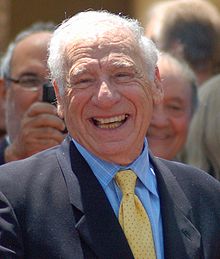 If you wonder why a science fiction blog is celebrating Mel’s birthday, it will come back to you in a moment.

Three of his films rank in the American Film Institute’s list of the top 100 comedy films of all-time — #6 Blazing Saddles, #11The Producers, and lucky #13 Young Frankenstein.

Extra lucky, because Young Frankenstein won Brooks both a Hugo and a Nebula.

His script for The Producers was so over-the-top he had to get an independent distributor to release it as an art film – but it earned him an Oscar in 1968 for Best Original Screenplay. Among the nominees he beat were Stanley Kubrick and Arthur C. Clarke, up for 2001: A Space Odyssey.

Brooks’ next two most successful films came out in the same year, 1974. Gene Wilder agreed to appear in Blazing Saddles on condition that Brooks’ next production would be based on Wilder’s idea for a parody of Universal’s Frankenstein films.

Brooks collaborated with comedy writer Buck Henry on the Get Smart pilot in 1965. He directed the 1987 sf satire Spaceballs.

He is one of the few artists who have received an Oscar, Emmy, Tony, and Grammy. The only other artist among those 12 with a significant connection to sf is Whoopi Goldberg.