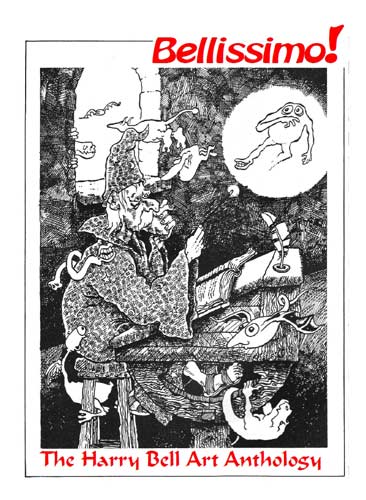 Bellissimo! The Harry Bell Art Anthology, a 122-page retrospective portfolio of Harry Bell’s fan art edited by Rob Jackson and originally published on paper in 2006 is now available for the first time as a free download at eFanzines.

Harry Bell is Rotsler Award recipient (2004) for lifetime work by a fanartist. He has won two Fan Activity Achievement Awards, in 2014 for the cover of Inca #9 and in 1977 as best humorous fan artist. He also was nominated for a fan artist Hugo in 1979.

Harry has been known for years for his cartooning skills, his fannish wit and sense of humour, and his eye for line and detail, among many other qualities.   He started with his own fanzine, Grimwab, in the Sixties, but really came to notice in the Seventies as part of the Newcastle/Sunderland group, Gannet-fandom, who were one of the most productive groups of fanzine fans around then.   (I know, I walked round our dining room table many times collating quite a lot of those fanzines.)  With the growing links with US fandom at that time as well as better fanzine reproduction, he helped set new standards for layout and visual humour in British fanzines.  And we had fun, dammit.

Quite a lot of these pieces count as rarities – they are from some obscure fanzines, some fairly exclusive ones and there are also some previously unpublished pieces.

[Thanks to Bill Burns for the story.]