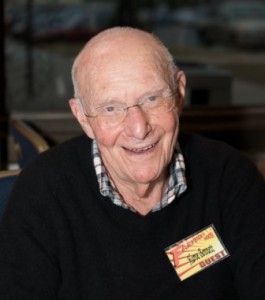 The Chicago native broke into show business as a young boy on the radio program Quiz Kids. He grew up, took a degree in theater from UCLA, served during the Korean War, then was hired as a producer for CBS in New York.

In 1956, Bennett returned to California and produced a daytime show hosted by Johnny Carson, then moved to ABC.

After rising to become ABC’s Vice President of Programming, Bennett transitioned to production. His first project was developing The Mod Squad with producer Aaron Spelling. When that ended in 1973, he joined Universal Studios and produced two genre hits, The Six Million Dollar Man and The Bionic Woman, and other shows.

He later moved to Columbia Pictures Television, and won an Emmy for A Woman Called Golda, which featured Ingrid Bergman in her final role, and co-starred Leonard Nimoy.

While at Columbia he was also brought in by Paramount Pictures to work in their TV series production division, a connection that led to him being offered the chance to take over the sequel to the first Star Trek movie. He made Star Trek: The Wrath of Khan, a hit at the box office and with fans.

At that point his immediate problem was to keep the original cast intact for the third movie:

“Everyone said, ‘How are you going to get Leonard to do another one?’” he said in a 2006 interview with the website The Trek Nation. “I had an idea. I went to see Leonard who was then in a play and we had dinner afterward, and I said to him, ‘I know you don’t want to do any more Star Trek. Leonard, do you remember Psycho? Do you remember that the biggest star in that picture was killed, to everyone’s shock, one-third of the way into the picture?’ He said yes, and I said, ‘I want to do that with Spock. I will give you the most glorious death scene ever played.’ He said that was a great idea, and he was on.”

Paramount offered Bennett the opportunity to produce yet another sequel with the original cast to mark Star Trek‘s 25th anniversary in 1991 but he declined for a variety of reasons.

His other sf television credits include the 1975-76 NBC series The Invisible Man, created with Steven Bochco and starring The Man From U.N.C.L.E. actor David McCallum, as well as less memorable productions like The Powers of Matthew Star, Salvage 1, Time Trax, Invasion America, and the miniseries Gemini Man.