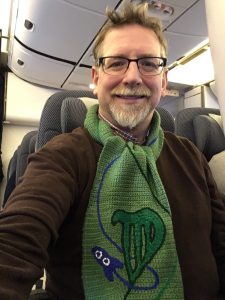 By James Bacon. I’m a bit rough around the edges. Coffee is trying to sharpen my state of mind and indeed it tastes good but I’m tired, that good tired where I cannot stop, the convention tired where you want to keep going, I’ve no headache or hangover but the body knows it’s been a punishing time, it’s been so much fun. A bit more sleep, that’s it. No. Wait. Not that much!

I’ve had a mighty time. I am farewelled in the lobby and I leap into the taxi with the delicacy of a well used wet bath towel hitting the bathroom floor. I get to O’Hare and am working on this piece as I go. It’s been great fun.

What is fun though? Why am I asking that question, how long before this piece goes a bit gonzo?

Fun is so subjective.

I’m not sure if the debate about what makes a con fun would match the passion that I saw demonstrated during the Last Jedi panel where it was clear that some wanted to debate really hard whether Rey, growing up on the streets, would have more or less skills than a whiney farm boy or whether the film was good or not and whether it’s now ruined the next instalment. There was earnestness there, an energy that manifested in thoughtful challenging opinions, held strongly and by people well able to put their argument forward clearly with fine examples. Did I ruin the fun by finding the intransigence of some entrenched views wonderful, pulling myself from the mired muddy débâcle to observe the melee, noting that watching on as opinions are sharpened and objections raised the blood obviously flowing more strongly as people care about the concepts and interpretations that they have taken from a film animate them into a position where it’s clear how there is no changing this viewpoint, and I’m not arguing, rather watching on impressed that a film can create such discussion and loving it. It was a fabulous panel, and Timothy Zahn was very good on it.

I saw people enjoying themselves, could mean anything.

I have to elucidate a little more coherently. Why did it feel good. It’s true I’m welcome here but from the reg desk through to the way people are applauded for their first Capricon, I hope they feel welcomed, but it sure looks like it. 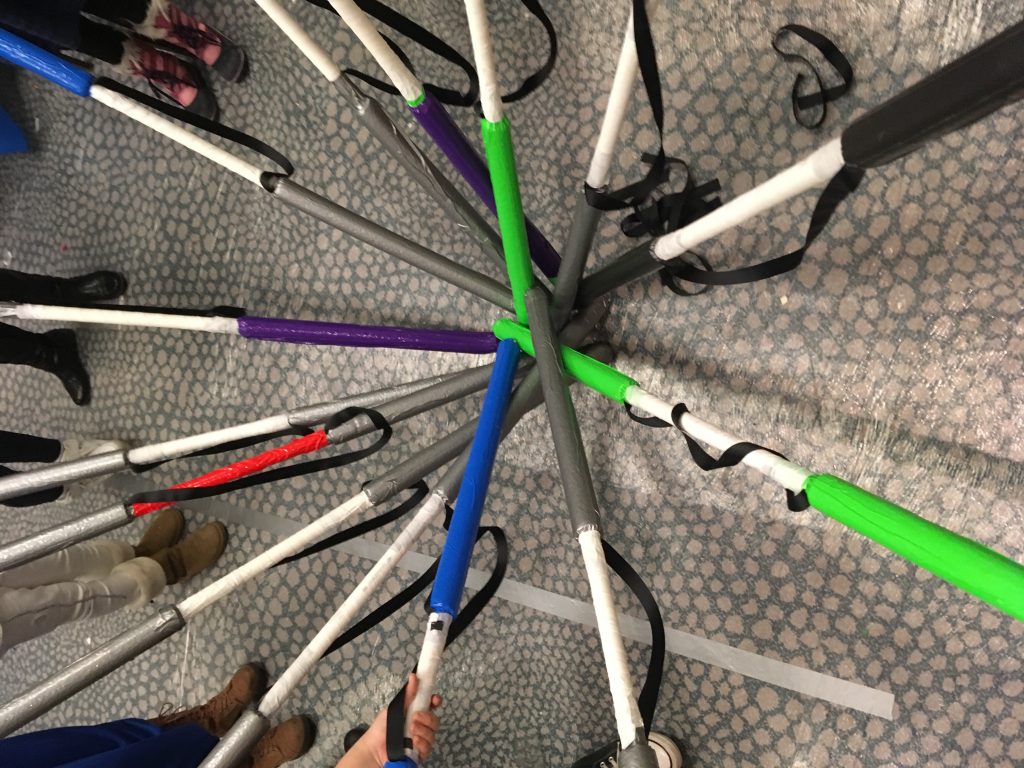 By Friday over 1,000 people were members, every child that walked into kids programme to make Rey’s staff was greeted warmly even when they were drifting between ambivalence, shy driven distaste, but all came along onward and all got the crafting going and soon the dejected few were finding that a multi coloured staff of their own design with their favourite colours was really desirable. All are then shouting CAP-RI-CON with a room full of kids where it’s all very organised but only a heart beat from chaos, and a good time while taking a five foot foam and pipe staff home was not all that bad. ‘Who doesn’t know Rey, any one need to be patronised about how awesome she is?’ I ask. They are smart and brutally honest, patient but happy to voice and act on immediate feelings and if you aren’t doing a good job, they will let you know. Fannish feedback that is not so much sharp, incisive and cutting here, but a brutal hack and slash instantaneous style that means one implores ‘no blasters no blasters’ and dive behind the table for cover.

My flight has gone astray. A bit. My plans today are changing shape. An hour for the dealers room to see the awesome Art Exhibit at Boskone, is now going to be lost. Indeed as I write this I’ve no idea if I’ll make the Craig Miller GOH item that has excited me so much. I was sure I’d miss it, then when the schedule came out it worked perfectly and now it’s in the air. Literally. I may turn up late. Sneaking in down the back and pretending I was there all the time could be a plan but it’s imbued with a rake of potential pitfalls, creaky doors, noises clumsiness, worse the entrance of shame with an annoyed welcome from the top, it’s all a bit exciting.

Damnit can this fecking plane not belt down the runway any faster. Maybe if I play some Ramstein it will quicken the pace. Faster. Come on. It’s not working. I flick the fingers over the glass and choose ‘Into the trap’ by John Williams, oh yeah, this is more like it, I’m pushed back into the seat, and soon we rotate, and hit some awesome turbulence just as I hear and imagine the falcon swooping through the fleet, the orchestra rising in tempo and quickening like my heart as we rise and jet skyward towards Boston.

Last night at Capricon; ‘Are you British?’ washes past me, was that a question, was it humour, was it rhetorical, can I spell rhetorical, I’m unsure, but the question fails to even raise a pithy, abusive and sarcastic ‘bloody septic’, and as I see there’s a response required I smile calmly, ‘no Irish’ which oddly leaves everyone else more worried than anything, is my smile menacing,  I try to smile more, it doesn’t help, is it now a bit demented looking, it’s easy to go astray with accents, and smiles, and aren’t we all fans, but this is awkward and doesn’t my Train Driving Licence have the Union Flag on it,’ I’m an immigrant living in London.’ I helpfully say. Did that help? I dunno. Everyone’s friendly, fall back to a trope or as I heard it described this weekend, a story device that frequently works well. ‘Where’s the beer?’ I smile as I ask, everyone smiles and points

Who’d nationalise individuals, isn’t that dreadful, aren’t we are all fans in this happy borderless bliss. British Fan Dermot Dobson careens around the corridor corner and I greet him, he is exceptionally well-known in these north westwards Chicago parts, and he is soon brandishing his new Irish ID at me, we embrace long and warmly and cheer and whoop and he smiles and gesticulates and I, in an instantaneous semi-official self-appointed capacity welcome him to his newly found fannish family and he describes the joy of his receiving his new passport and I’m pleased like he’s joined Dublin 2019 but a version that is infinite. Irish fan Dermot Dobson. Many are envious. I ponder if we can import all the fans and make them Irish and whether Octocon chair Janet O’Sullivan would string me up, strike me down or send me some extra membership forms.

Also, proof that even our Chair helps out at these tables. Here is James with our table wrangler Pam at #capricon yesterday! pic.twitter.com/yE6g60AIGK

There’s a Star Wars vibe at Capricon but it’s not overpowering. Sarah Wilkinson and Timothy Zahn are show stealers, both are so erudite and enthusiastic but also love the world they have a place in and it shows. I meet four Princess Leia’s, although I admit I wish there was a Jyn here, there’s a couple of Sith and a few Jedi, I’d like more rebels really. I cosplay up myself, doing a personal interpretation of The Bombshells Batgirl in a Baseball uniform but adjusting it as you do and switching up to Batwoman. I meet Michigan fans in Star Wars cosplay, and an excellent local family, with superhero and star wars cosplay on. 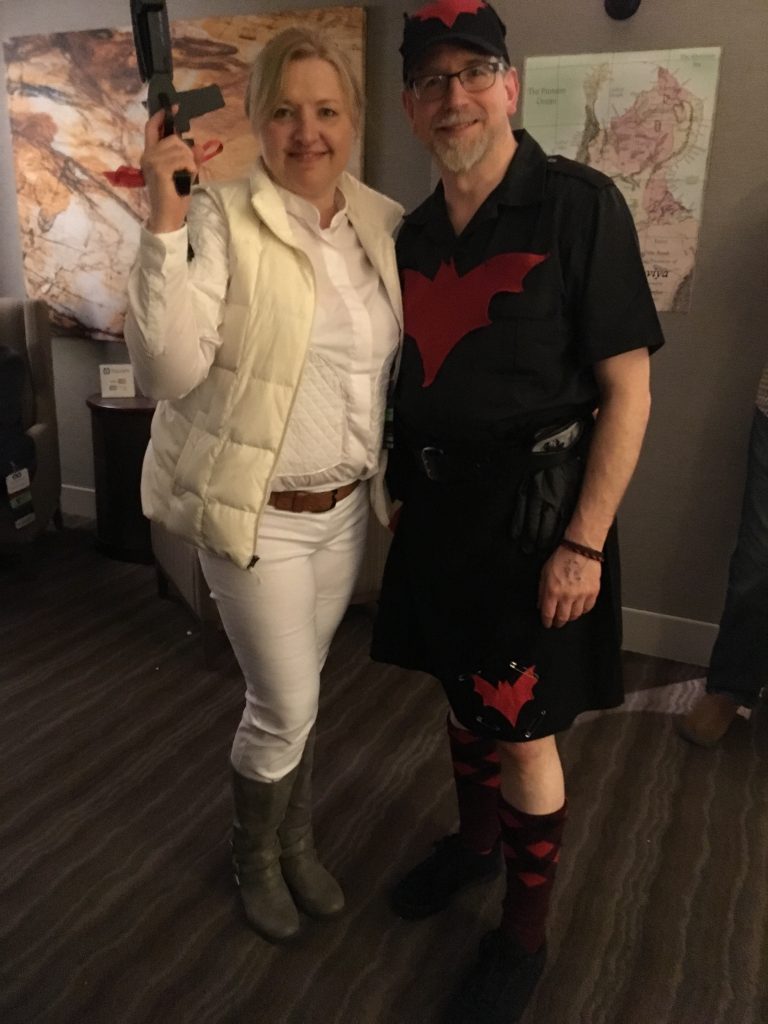 There’s a solid programme at Capricon and it creates that conflict of annoyance that there is too many good things to go to. There’s over 200 programme items and that doesn’t include screenings, games and all the parties. Items of interest vary from discussing Mary Shelly at 200 to the diversity backlash. I consider listing my top 10 programme items, but rather, I shall cover my favourites in more detail later. It has been a great programme.

I’ve missed a cracking party at Boskone. Erin Underwood arranged a Dublin 2019 late night meet up. I’m envious although at the same time I’m dancing at a party, my feet flying across the floor like a rhino on ice. I am not the only one dancing, and across in Boston, I hear reports that Geri Sullivan is leading the dance there. Erin reports that great chat is happening as fans sit around and are joined by Dublin GOH Ginjer Buchanan and the dancing is fun and there are lots of green lights. Meanwhile, the Dublin 2019 team in Dublin may be sleeping after an excellent day at Leprecon. I get sent a lovely set of photos, one in Scrabble’s letters, really makes me smile. 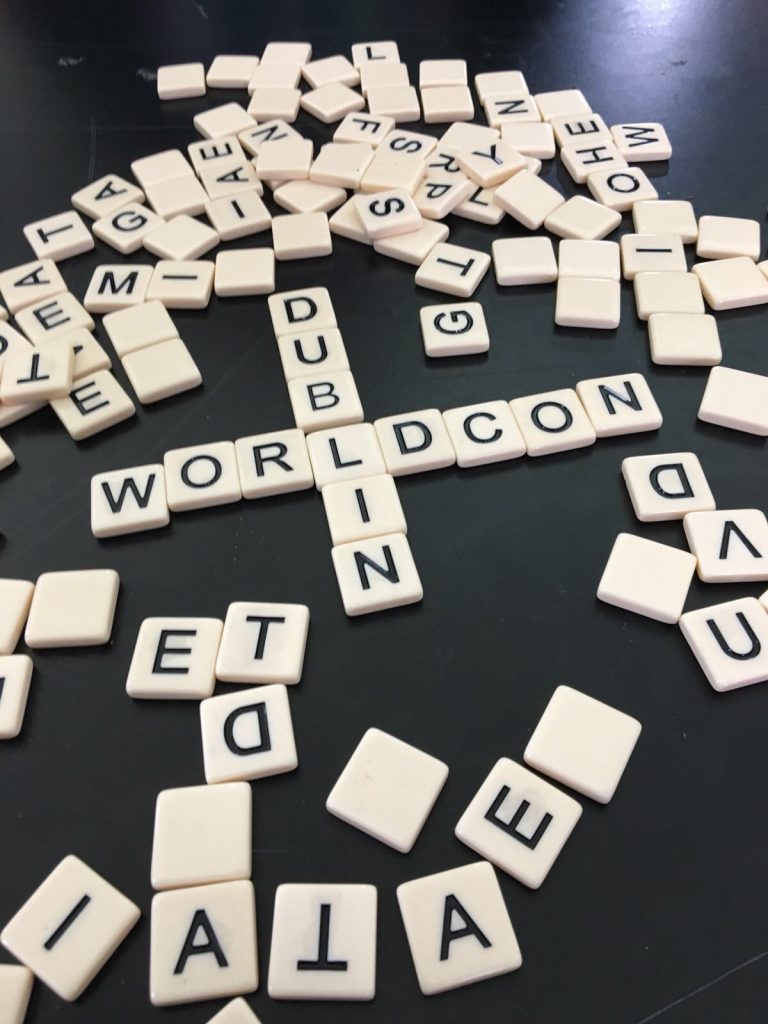 Back at Capricon, Tammy has set up a ‘Pop-Up’ cocktail spread at Lance’s party, and Deanna is doling out fabulous ciders. Cows are having a fun session, and I cannot believe that Dr Zhivago nails it. (Fannish Family Feud) Barfleet are here in strength with two party suites, providing a disco, Friday was awesome 90’s music, now there is a great mix, decent rock and well-known anthems. They really know how to party. The Barfleet team show everyone a great time, and indeed very warm welcome. The UBS Abandon, the Chicago Chapter of Barfleet is celebrating its tenth anniversary, and they really throw one hell of a party, while it is lovely how they recognise their volunteers so well, and indeed, recognise fan achievment. I am impressed. 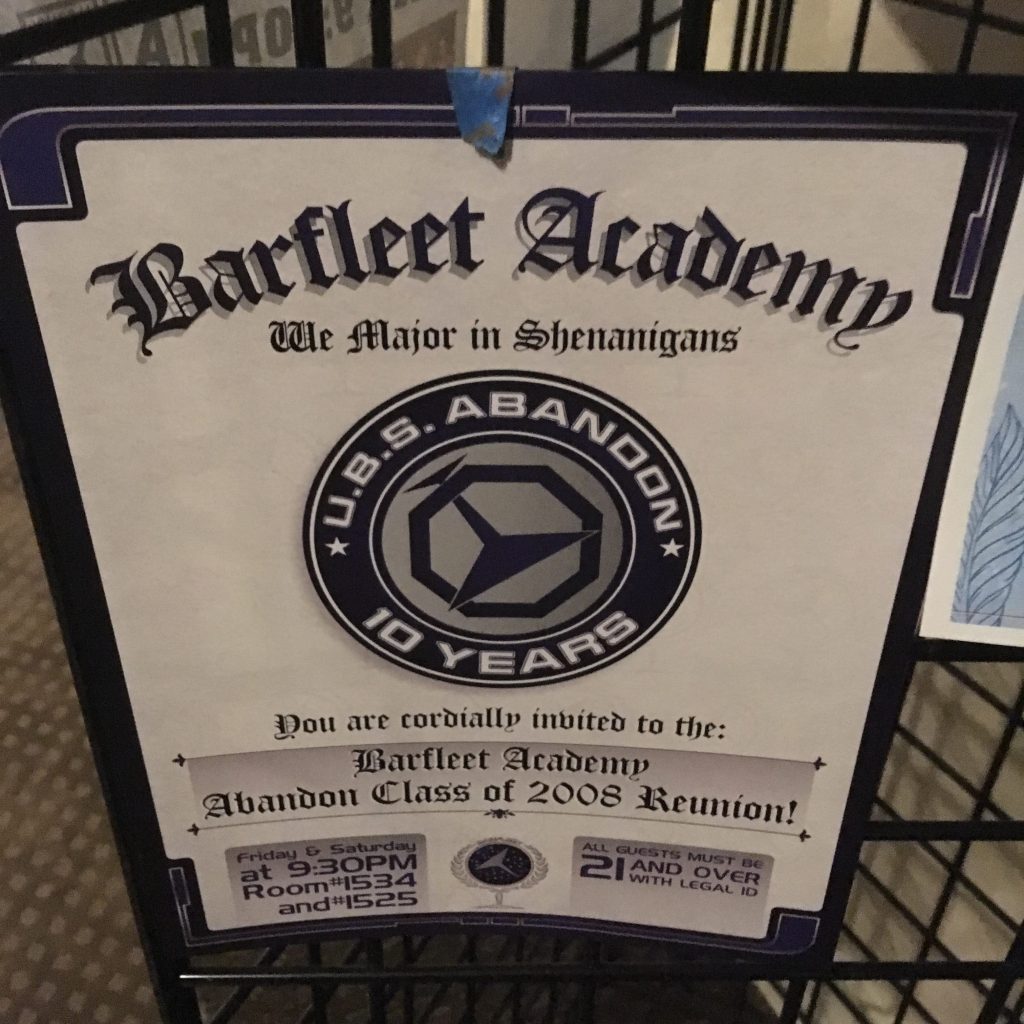 The plane, which has formed my writing desk, is descending. ETA is 12.50 it’s early. John Williams has worked, the Cap-bosk run in six parcecs! It’s 12.20. OK, so we did it in less time, and the distance is 4.694e-11 in parsecs, but don’t ruin the flow of a good story with hard science.

We land. We taxi…Why has the plane stopped?  This is not good. This is not a jetty this is somewhere in Logan but not where I need to be. That’s it. Move to the jet bridge. Unload you feckers. Luggage. I have all the luggage, it’s 1240 now. Jackie Kamlot is waiting, the car is not revving, but soon it is. Crikey we are going.

12.48 I can see the Westin on the horizon, the car skews around and we gain traction. Engine still running as I get out. 12.54 I am walking into the Westin, badge on, say hello to the Dublin fan table team, and beg grace to go see an item, and then walk into the Harbour III room just as Craig finishes ensuring the presentation is set up right. Craig starts. Made it. Done it. 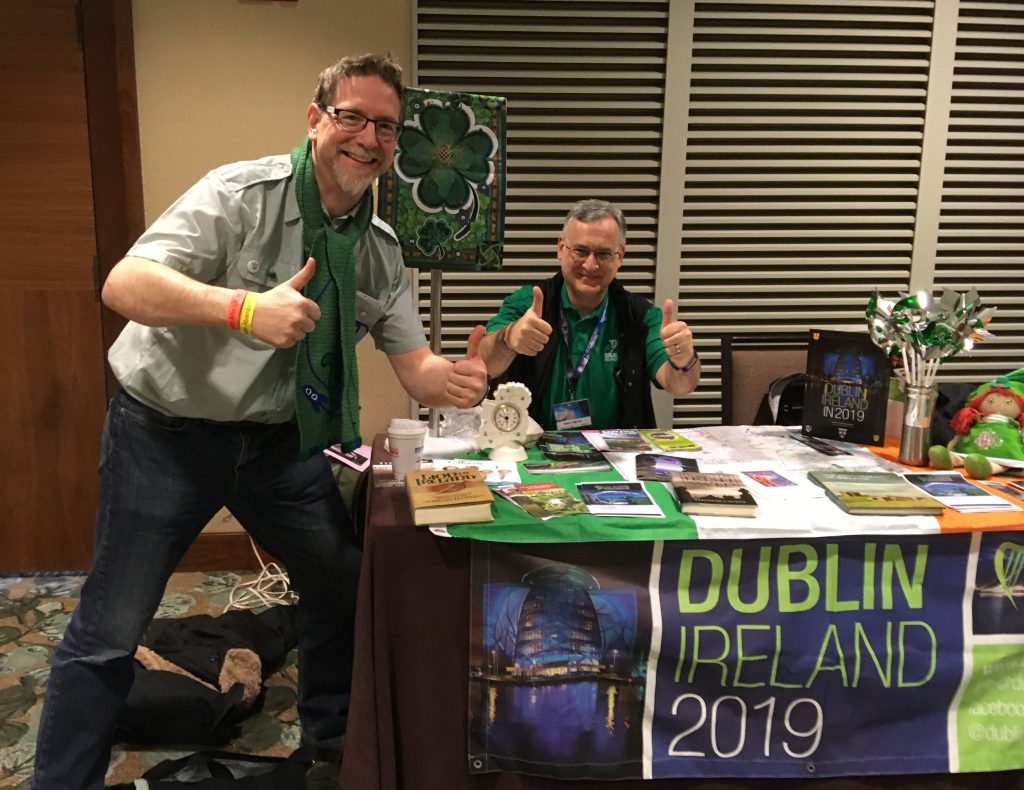 2 thoughts on “Have scarf will travel. Part three.”