The lone star rises
A third time shining on us
As we reach for space. 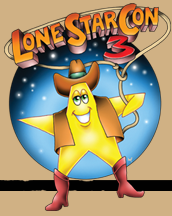 The LSC3 newszine, of course La Estrella Solitaria (Spanish, “the solitary star”), kindly printed this contribution of mine. Sunday at 3:30 a.m. I heard Kathy Mar sing “Starship and Haiku”.

NASA kindly sent an exhibit, astronaut Cady Coleman, and engineer Heather Paul. Two suits from NASA stood next to the Heinlein Society. I said the title Have Space Suit, Will Travel didn’t really depend on knowing Have Gun (24 episodes by Gene Roddenberry). We celebrated the 50th anniversary of Glory Road.

Coleman on Hugo Night gave a Con Committee Award – not done every year – to Stan Schmidt. Paul Cornell gave him a Hugo. The Big Heart Award went to Tom Veal. Video wizard John Maizels made the most of Chris Garcia.

Down Under Fan Fund delegate Bill Wright from Australia was in fine form, also Trans-Atlantic Fan Fund delegate Jim Mowatt from Britain, and my counterpart the North America TAFF Administrator Jacq Monahan. Japan confirmed its bid for 2017, with which Montréal will compete. Dublin announced for 2019.

Leah Zeldes & Dick Smith miraculously got to the TAFF/DUFF fundraising auction the copy of Pebble in the Sky autographed by Fred Pohl we almost managed last year. It may be unique.

Pebble was an SF Classic discussed at Chicon VII; it’s set in Chicago. I’d found a mildly rare paperback and thought to ask Pohl. He could inscribe “I did not write this book, but I brought it into existence. Frederik Pohl, accoucheur.” In fact he signed “the Godfather”. Then by no one’s fault it sat in Illinois. I still don’t know how it arrived.

The news of Pohl’s death came around Closing Ceremonies. It was indeed a closing. He began in the 1930s; he bought Larry Niven’s first story and hired Judy-Lynn del Rey; now he’s immanentized the Eschaton.

On Wednesday and Thursday volunteers helped me mount the Rotsler Award exhibit, which for some reason was in the Art Show. “I want you because you’re ignorant,” I said. “I know too much. You can pick out drawings you find visually appealing regardless of the back-stories and in-jokes.” People said the result was good.

The Art Show had a great Darrell Sweet display. One painting was the cover for my copy of Space Cadet. Another, used as the cover for the Program Book (“Souvenir Book” if you were writing this) was his “Isle of the Dead”, which my Art Show tour discussed. I was glad to see too his non-SF themes. Wire wonder woman Elizabeth Berrien won Best of Show.

A fine LSC3 idea was a First Worldcon ribbon. To wear it invited explanation. They ran out and had to be re-ordered.

My talk on The Glass Bead Game drew helpful participants. This masterpiece of Hesse’s is a hall of mirrors. Does anyone change? Maybe Father Jacobus. One fan said “Now I have to read it in German.” Two days later Terry Sisk Graybill saw to the heart of The Dying Earth: “at the last chapter you re-think the whole story.” She’d met Vance, who gave her a kazoo.

I ran into Yasser Bahjatt in the Dealers’ Room. He was wearing Sa‘udi Arabian dress. I said “I don’t wish to be disrespectful by giving you a hall-costume award” – I was Chief Hall-Costume Judge – so we talked about it and he took one. I had been a Workmanship Judge in the Masquerade. Janice Gelb fictitiously lost an eye in a disaster to well-omened redshirts.

After the tumult and shouting had died I found three visitors adrift in the Exhibit Hall. They’d just heard of the con and wondered if any was left. I scavenged some Program Books and Pocket Programs and answered questions. Jonathan Miles came by and helped. Did it matter that he and they were black? I don’t know, but good dealers are smart. I walked the three of them out to the river, went to Dead Dog parties, and went home.

1 thought on “Hertz: Texas and the World”