By Mark L. Blackman: On the evening of Wednesday, December 17, the Fantastic Fiction Readings Series hosted readings by authors Steven Gould and Rajan Khanna in the Red Room at the KGB Bar in Manhattan’s East Village. The Bar, up a steep and very narrow stairway, known for its red walls and Soviet era-themed décor, seemed incongruously bedecked with Christmas wreaths and lights, making perhaps an even more fitting venue for sf readings.  The Series, co-hosted monthly by award-winning editor Ellen Datlow and Mathew Kressel, presents readings (always free) both by well-known speculative fiction writers and up-and-coming future luminaries, nicely epitomized in the night’s double bill.

Customarily, as the audience settled in, Datlow whirled around photographing the crowd (the photos are posted on the website). The event opened with Kressel welcoming the audience, thanking the Bar and announcing upcoming readers: On January 21, 2015, Gregory Frost and Andy Duncan; on February 18, Mike Allen and Ben Loory; on March 18, Caitlin Kiernan and Lisa Manetti; and on April 15, James Morrow and Ken Liu. (It was reported that Kiernan would soon after be moving from the area to Georgia. “Which one?” In a place named KGB one couldn’t make an assumption.) He then introduced the first reader of the evening, a personal pleasure, as Rajan Khanna is also a friend.

Khanna’s short fiction has been published in Lightspeed Magazine, Beneath Ceaseless Skies and several anthologies, his articles and reviews have appeared at Tor.com and LitReactor.com, and his podcast narrations may be heard at Podcastle, Escape Pod, PseudoPod, Beneath Ceaseless Skies and Lightspeed. It was easy to see why, as his soft voice is, as we heard, well-suited for narrating. 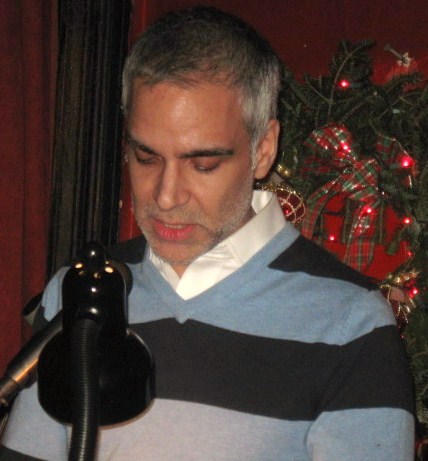 He presented several scenes from his first novel, Falling Sky, which was released in October. The story is set in a post-apocalyptic near-future where fuel is so expensive that airships have come back, and, if that weren’t cataclysmic enough, there’s a global pandemic, the Bug, that regresses people to a violent, animalistic (and, of course, hungry) state; they are called Ferals, and their blood splashing on one is enough to spread the infection. The first scene that he read was set on the Cherub, the protagonist’s, Ben Gold, airship; his companion, Miranda, is among those trying to cure the Bug, taking what he views as unacceptable risks. In a later scene, he is driven from the ship, his only home. The final scene read was selected, because, as Khanna noted, Ben is Jewish and “it’s Hanukkah” (for the record, it was the second night). Ben, settled on an island refuge, encounters a rabbi and his makeshift synagogue, and reminisces about his father and his cursory education in his religion during what was already the era called the Sick. (Understandably, and already living in the Cherub, he identified with the story of Noah.) Reinvigorated, he resolves to regain his airship. (As a “token Jew,” said Kressel, “I approve this message.”) 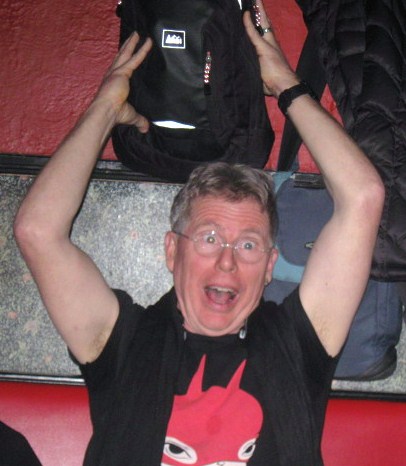 After an intermission, Datlow introduced the second and final reader. Gould – not to be confused with the late evolutionary biologist Stephen Jay Gould – the author of 10 science fiction novels including Jumper, has been a finalist for the Hugo, Nebula, Compton Crook, Locus and Prometheus Awards, and the recipient of the Hal Clement award for Young Adult SF as well as having his novels cited by the American Library Association as best books for young adults. During the 1990s, Jumper – which, by the way, I heard him read from way back at the New York Review of Science Fiction Readings when they were at Dixon Place – was one of the most banned books in the U.S., which, he has mused, “only shows that most people should read past page nine.” He read from his latest novel, Exo, the fourth official book in the Jumper series.

(There is a fifth book, Jumper: Griffin’s Story, that is a tie-in to the 2008 movie Jumper, which only cursorily resembled the novel.) The series begins with someone, Davy Rice, who can teleport, and, as it proceeds through Reflex and Impulse, we find out that others can as well. “The real secret to teleportation,” says Gould, “is reading. Be transported, imagine!”

In Exo, from which he read, Davy’s now-teenage daughter Cent (short for Millicent), who shares the ability, uses it to go into space (in a pressure suit). The selection began slow, with techno-jargon about adding velocity to a teleport, then became amusing as Cent’s satellite phone company intercepts her conversation with her father, baffled as to how and why her handset is orbiting west to east some 210 miles up, moving at 45 miles per second. (That’s not in her family’s plan’s Terms of Service!) Unfortunately, Gould’s reading was briefly interrupted by sirens outside; there arose such a clatter, that people flew to the window to see what was the matter.

Books by both readers were for sale at the back of the room from the Word bookstore in Brooklyn. Much of the audience hung around for a while afterward, then an expedition headed out for dinner.