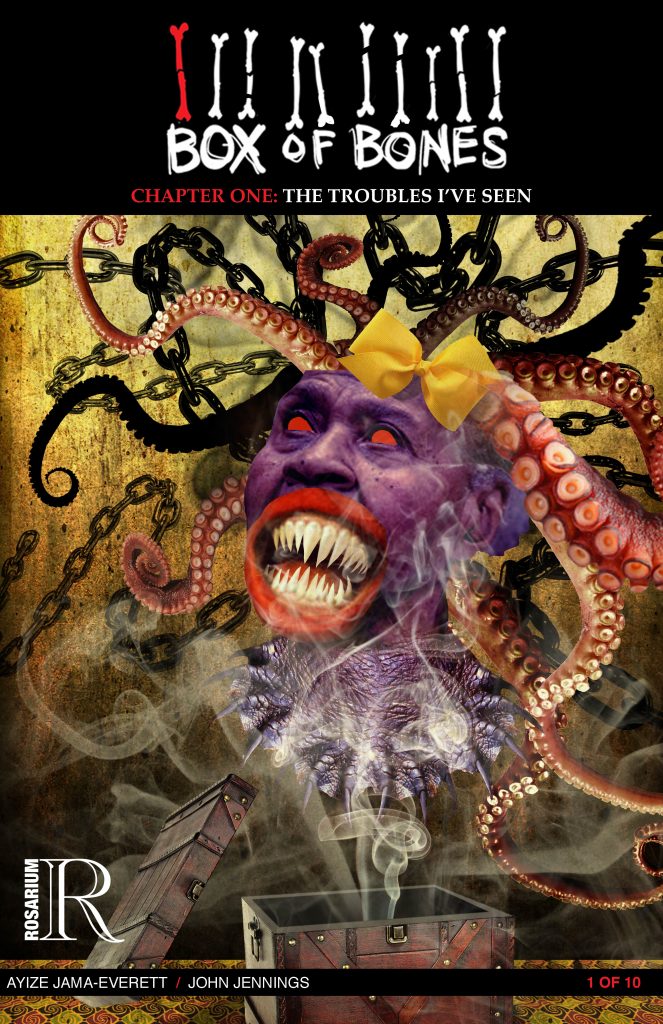 Box of Bones is Rosarium Publishing’s latest comics project, by Ayize Jama-Everett (The Liminal People, The Entropy of Bones) and Eisner Award winner, John Jennings (Octavia E. Butler’s Kindred, Blue Hand Mojo: Hard Times Road). With a mix of fantasy, horror, and sci-fi writers, Box of Bones will lead readers on a fantastical journey to the depths of the darkest parts of history.

Described as “Tales from the Crypt Meets Black History,” Box of Bones is a supernatural nightmare tour through some of the most violent and horrific episodes in the African Diaspora.

When Black graduate student, Lyndsey, begins her dissertation work on a mysterious box that pops up during the most violent and troubled time in Africana history, she has no idea that her research will lead her on a phantasmagorical journey from West Philadelphia riots to Haitian slave uprisings. Wherever Lyndsey finds someone who has seen the Box, chaos ensues. Soon, even her own sanity falls into question. In the end, Lyndsey will have to decide if she really wants to see what’s inside the Box of Bones.

Jama-Everett and Jennings have assembled a talented group of artists for this ten-issue project, including cover artist, Stacey Robinson (I Am Alfonso Jones), David Brame (MediSIN), Avy Jetter (APB: Artists against Police Brutality), and Tim Fielder (Matty’s Rocket). The first issue (penciled by Jennings) will appear digitally later this fall with the first five-issue trade paperback appearing in late summer 2018.

2 thoughts on “Horror Comic “Box of Bones” Coming from Rosarium”