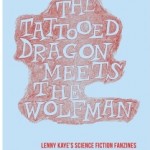 Curator Johan Kugelberg, responsible for the exhibit of Lenny Kaye’s fanzines at the NY Art Book Fair this weekend, has written a provocative and insightful brief post that explains fmz to the world in “Science Fiction Fanzines Before The Future Got Broken”.

The maze-like pop/counter/subculture narratives of the second half of the 20th century are as open-ended as life itself—just as chaotic, and as messy. Science fiction fandom is a path in the maze. Clues are contained within, hinting how the 21st century became what it is, even if we certainly don’t know what that it is, or what turns took us where. And we also have the concern that some wrong turns brought us to existential dead-ends now facing us in our everyday lives.

Long story short: subcultural weirdos flocked together through the magic of sending materials through the mail, through cheap means of duplication, and through the maniacal quest for the most picturesque parts of the inner landscape as midwifed by what sometimes is called fantastic literature—horror, science fiction, fantasy, and its ilk.