The Twilight Zone episode “The Eye of the Beholder” was originally aired this date (November 11) in 1960.

Nope. Failure. When the bandages are removed she looks like blonde actress Donna Douglas… 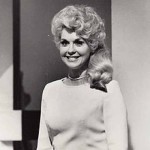 …a terrible thing in a world where everyone looks like — 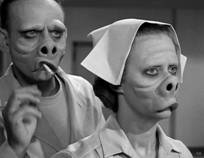 Fortunately, there is a refuge where people with her deformity can live happy and productive lives. It’s called Beverly Hills.

As most TV watchers know, Douglas was cast as Ellie May Clampett in The Beverly Hillbillies, which premiered in 1962 a few weeks after the initial rebroadcast of “The Eye of the Beholder.” (You think maybe CBS scheduled that on purpose?)

Before then Twilight Zone linked Donna Douglas to comedy in her other appearance on the series aired in May 1962, a humorous outing titled “Cavender Is Coming” that enjoys the odd distinction of being the only episode of Twilight Zone originally broadcast with a laugh track.