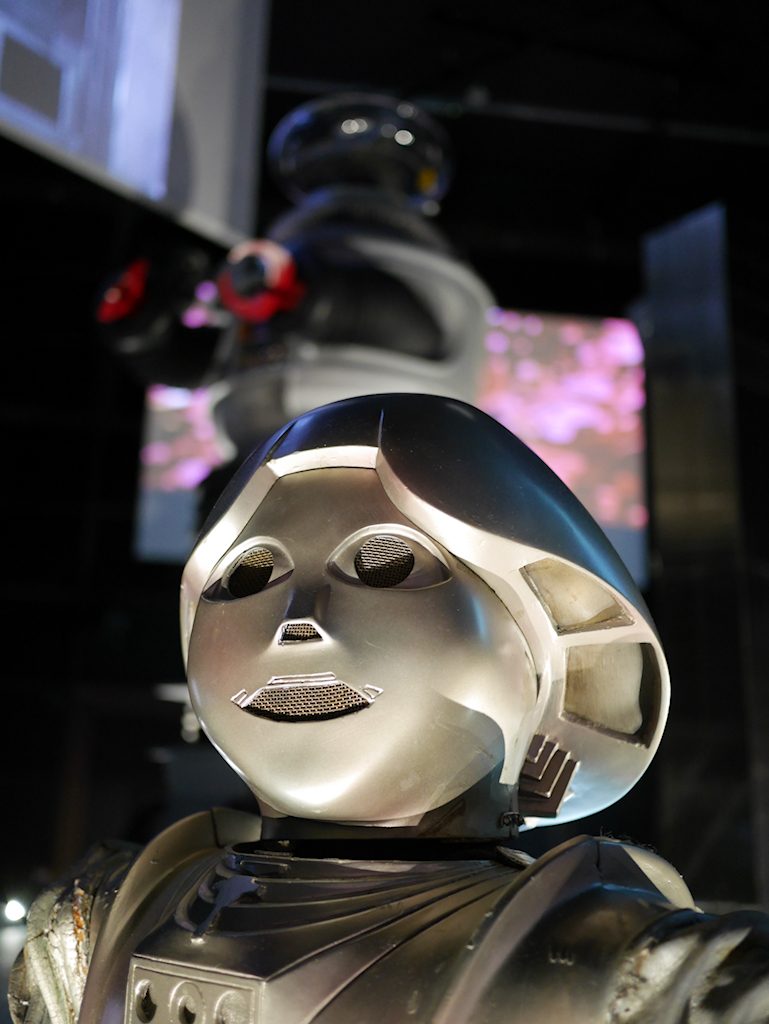 Twiki, menaced by Robbie in the background

By Mark Hepworth: The events that London’s premier arts venue The Barbican is currently hosting include a production of The Tempest, a viewing of a David Lynch biopic, a display of paintings on the subject of Sufism and music…and an exhibition on the history of Science Fiction. There is often a feeling of tension between SF and the artistic mainstream, be it a sense of resentment when someone like Margaret Atwood seems to try to manoeuvre away from the genre label, or slightly dismissive reviews in the ‘serious’ press. While genre barriers do seem to be falling, it’s still unusual to see SF getting such deep attention, and so I couldn’t resist the opportunity to fit in a visit to “Into the Unknown: A Journey through Science Fiction” to see how it treated its subject.

Billed as a festival-style exhibition with more than 800 works, it is scattered across several floors and areas of the Barbican. The curator is Swiss historian and writer Patrick Gyger, whose bio gives impressive credentials – he was director of the Swiss SF collection “Maison d’Ailleurs” where he opened a wing dedicated to Jules Verne, has worked with the European Space Agency, run Utopiales, and been GoH at Eurocon. 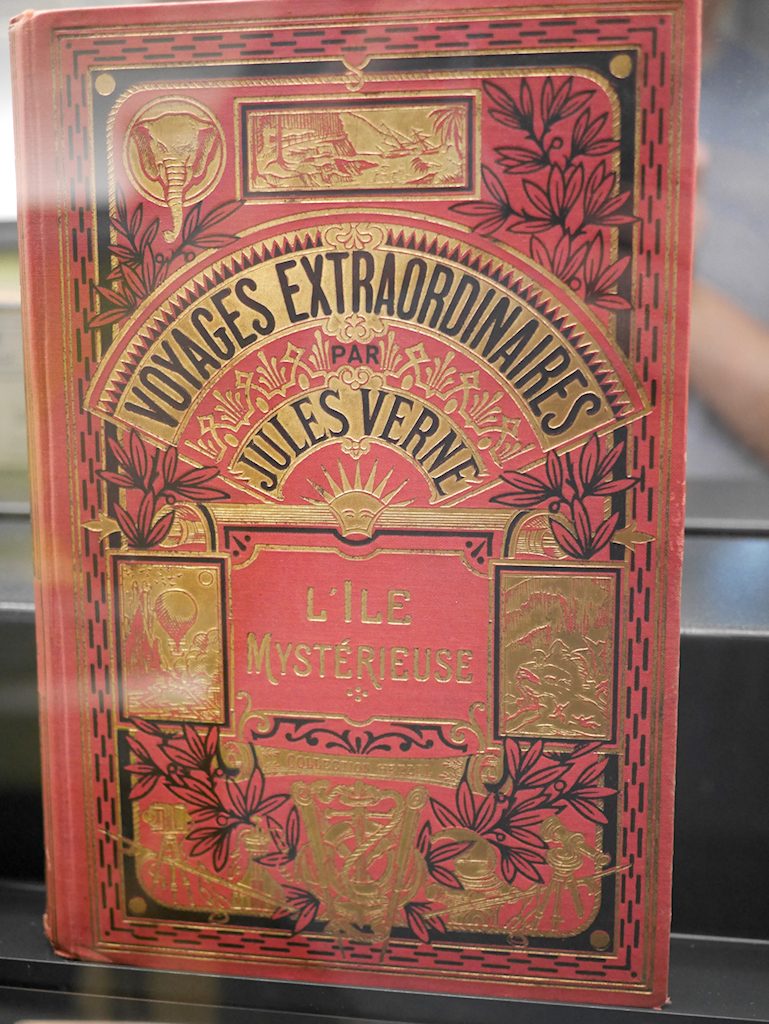 ‘The Extraordinary Voyage’ itself

His exhibition begins with a walk through four loosely-themed sections, and in the first his love of Jules Verne comes through very clearly as you enter: Extraordinary Voyages begins with the early years of wonder and speculation, filling the space with models, displays, films, and books either from the early years of SF or inspired by it. It has a story to tell but doesn’t press its conclusions on you; rather it allows you to wander through and let the theme assemble itself. For example, here you can trace a line from the prehistoric creatures at the Centre Of The Earth through the modelwork of Harryhausen to portrayals of Godzilla. Finding these mini-themes among the artefacts is a voyage of discovery. 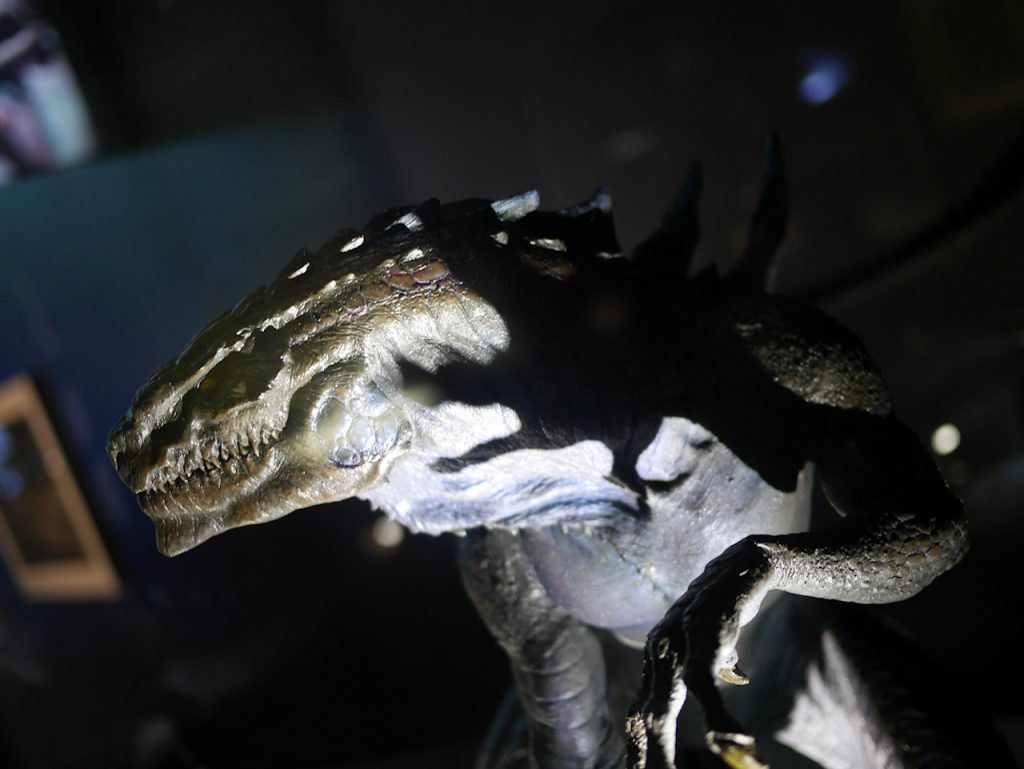 Space Odysseys hits another familiar theme, giving us spaceships and spacesuits whose inhabitants tend to either find something wonderous, or get eaten by something terrible. The section seems to think that despite our fascination with all the things that could go wrong – from the technical challenges of The Martian to the many ravening aliens we imagine waiting for us – our native optimism is what comes through, with an interesting selection of old Soviet media showing the use of Space as a new heroic frontier shelved near to a script for “Journey Beyond the Stars” – hand-corrected as 2001 A Space Odyssey – and a copy of Merchanter’s Luck. 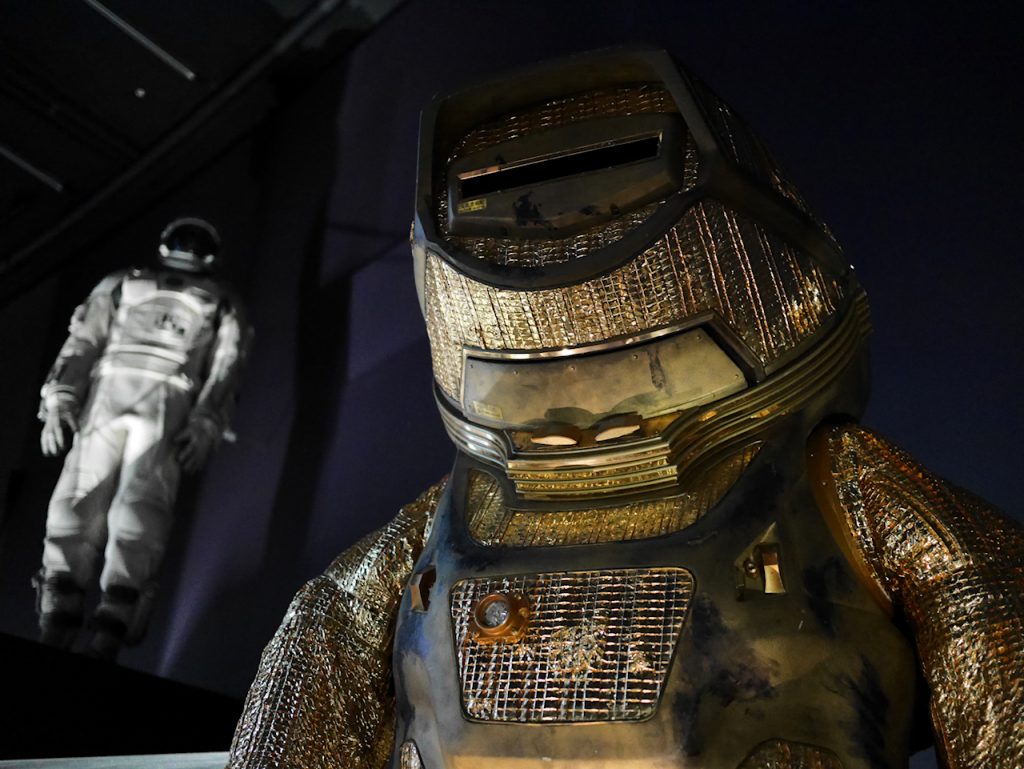 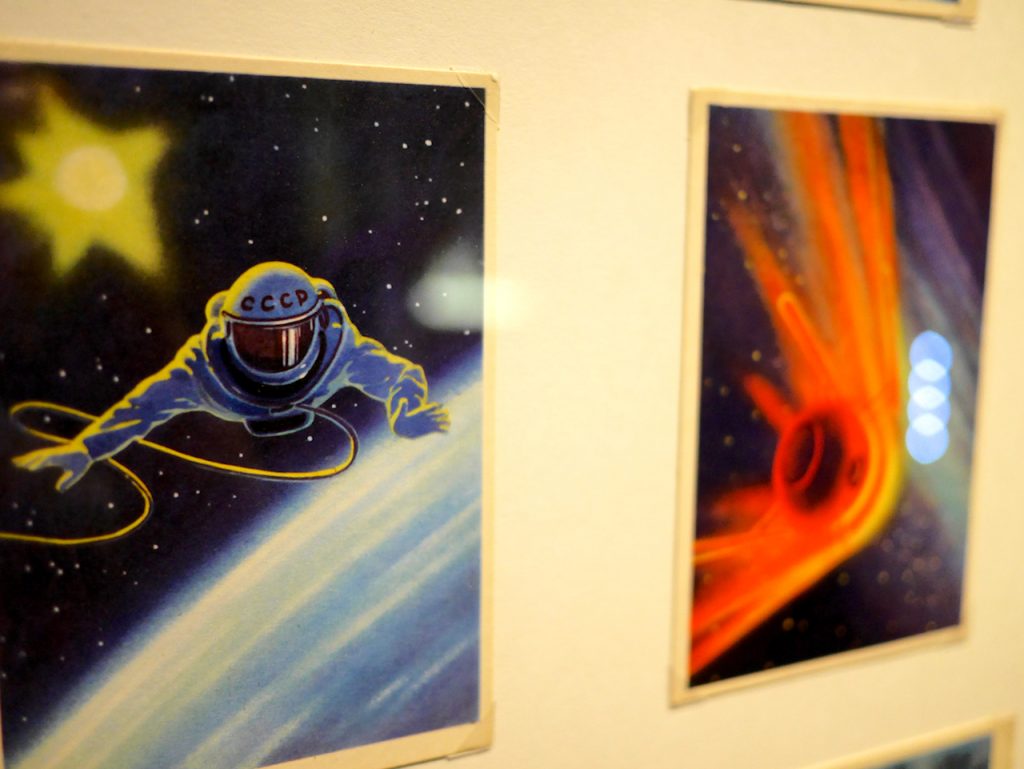 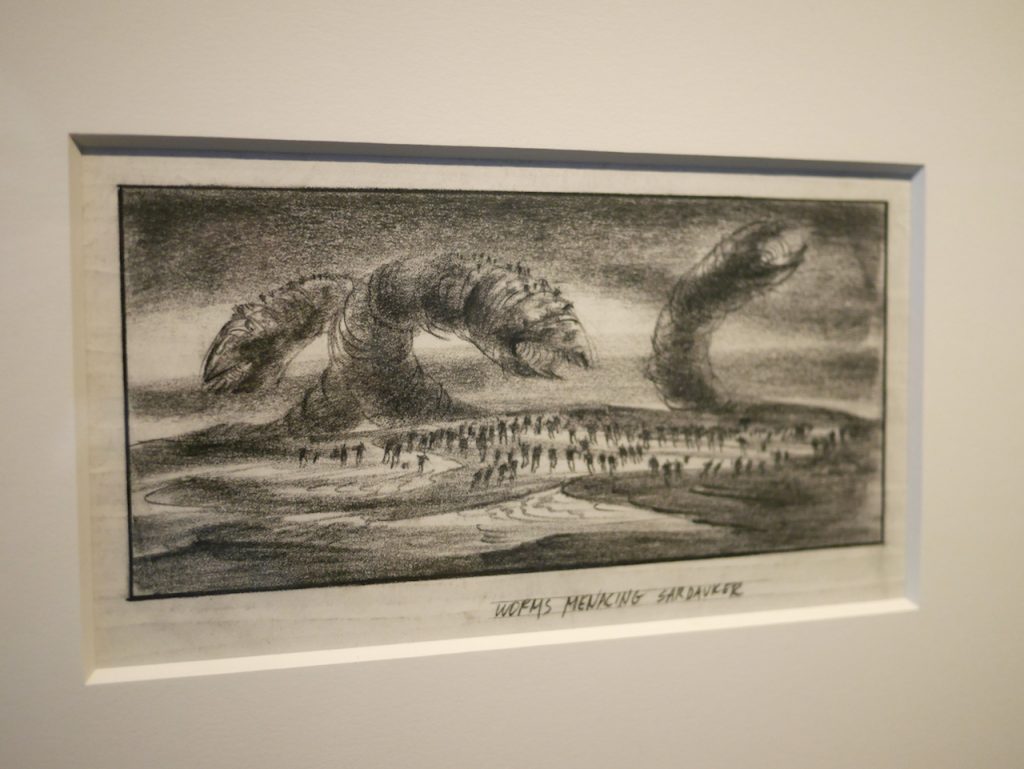 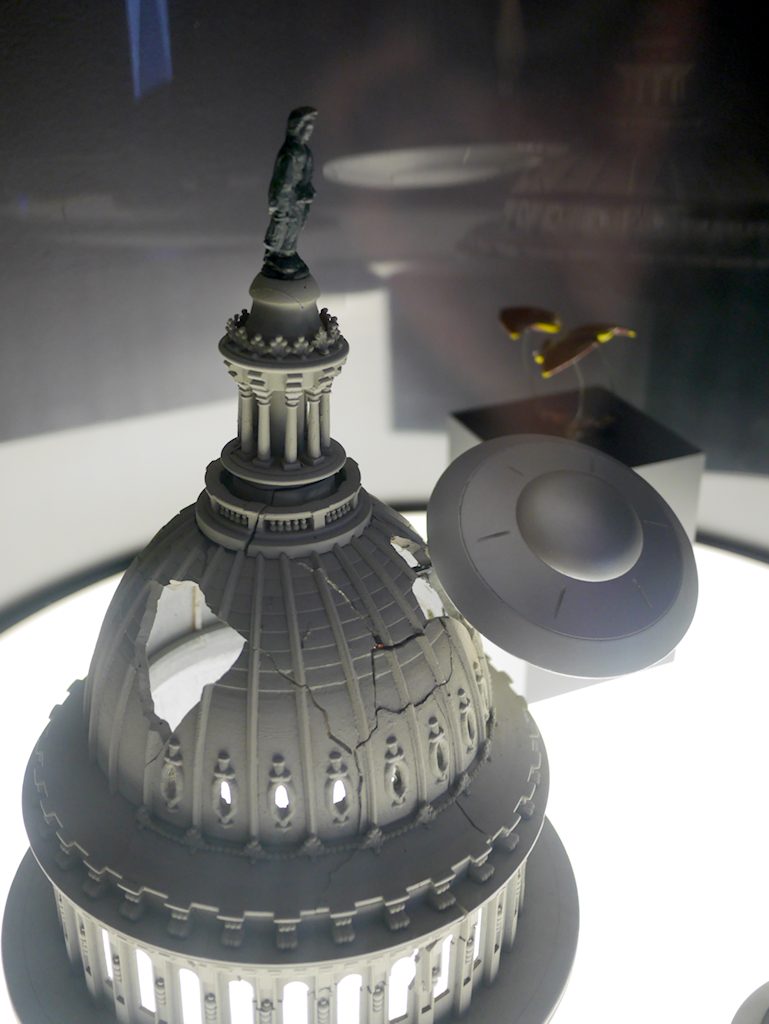 ‘Earth vs the Flying Saucers’

Next, Brave New Worlds turns its viewpoint inwards with dystopian societies and utopian cities, and reminds us that SF has always been imagining the future in ways both extravagant and – occasionally – accurate. We may not have our jetboots yet, but displays of what people were imagining of us a hundred years ago illustrate that they were hoping in vain for personal flying wings back then, too. The link between SF and architecture makes an interesting appearance here, with the cities of the future imagined by professional architects looking perhaps little different from the ones imagined by SF visionaries. 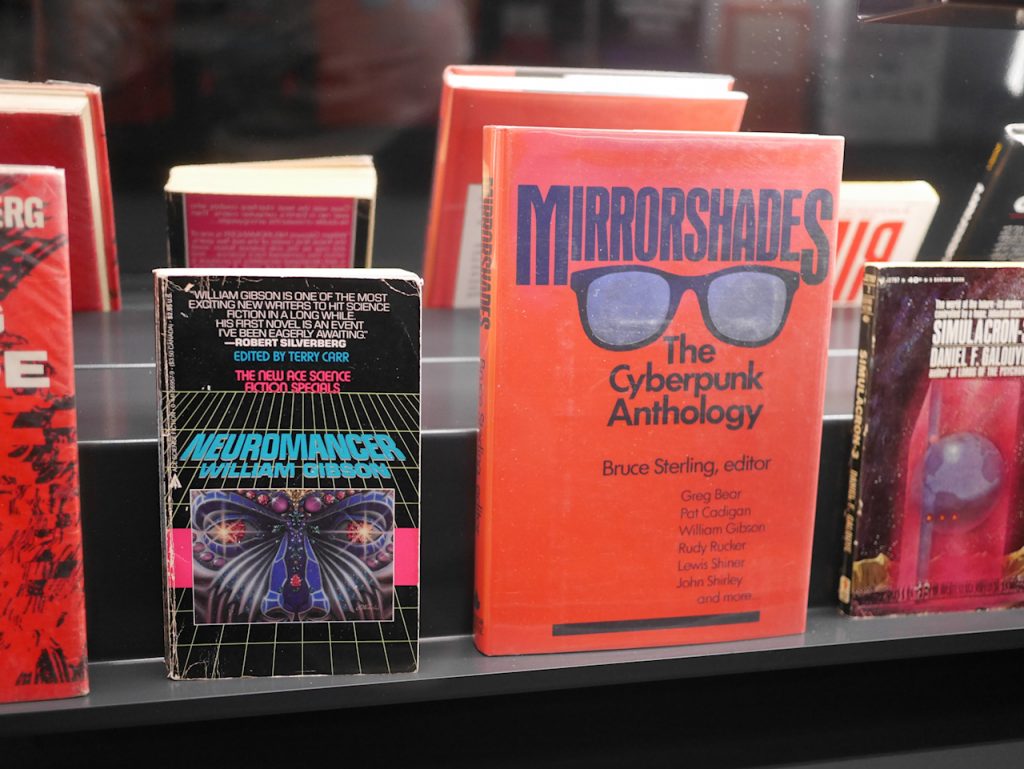 ‘Mirrorshades’ and other seminal works

The main section ends with Final Frontiers: not space, but the body and the brain. Robots merge into cyborgs merge into AI as it makes the obvious – but true – observation that we’ve always been fascinated by what we will turn into, or create to compete with ourselves. 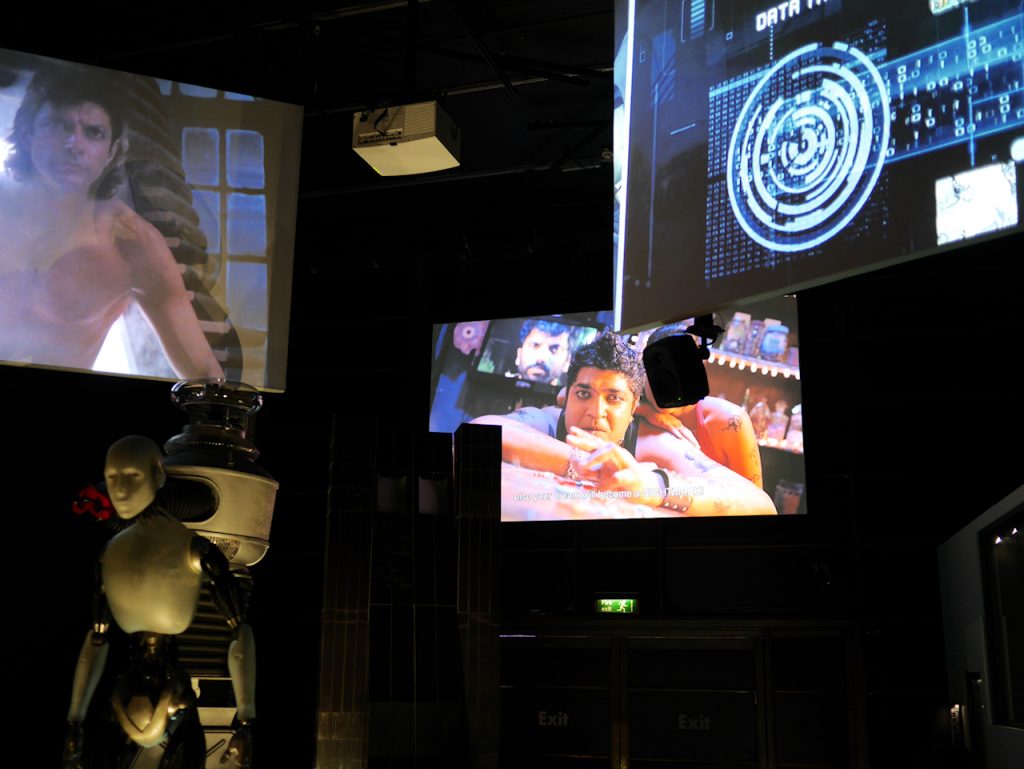 The many screens of ‘Final Frontiers’

The exhibition works by cramming so many elements together that you are forced to confront how they all interact. The result can be rather crowded and almost claustrophobic, as films overlay models and soundtracks clash so you can’t really settle and see any one thing. Each section has a fine display of books, acknowledging that while the silver screen may have produced the iconic visuals of SF, books have always provided the iconic ideas. Unfortunately, there’s not much to do with the books other than display them in cases to be stared at, which is no way to experience a story, and unfamiliar ones leave you to simply judge them by their cover. I’m sure something more could have been done to bring them fully into the story – displaying extracts or perhaps playing audio. 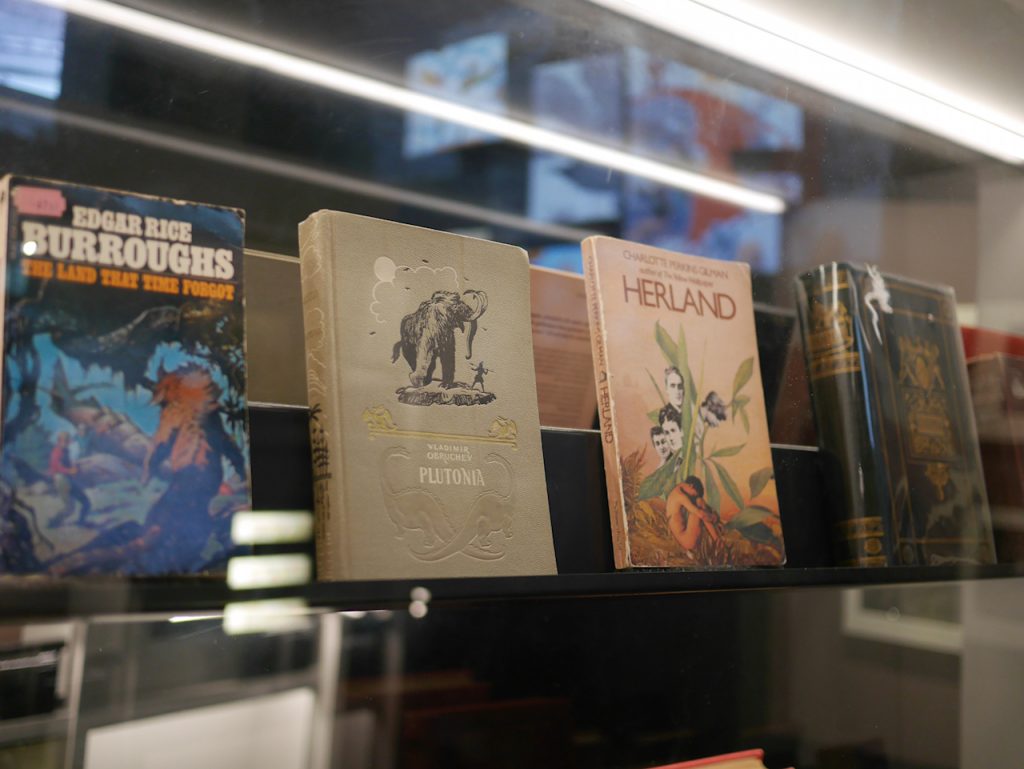 The books of ‘Extraordinary Voyages’

Those four parts comprise the heart of the exhibition and took me about an hour, but you could linger over some of the film clips for much longer if you wished though. I’ve only touched on the wealth of artefacts, some of which were rather rare or valuable – there was only a very thin piece of plastic between me and an Amazing Stories #1 at one point – including original props, prototypes and artworks borrowed from private collections.

You then have to head out to find other elements scattered around the Barbican. Unfortunately for me, the other thing scattered around the Barbican on the day of my visit was a few hundred happy graduates and their families and so I missed out on several small elements among the crowds. I did descend into the basement to find an art installation entitled In Light of The Machine, in which a device casts ever-differing shadows around a dark and formless room. I suspect that on most days I would have filed this under ‘Modern Art is Rubbish’ but, suitably primed by the exhibition I found it linked back to the architecture of the Brave New Worlds section in quite an interesting way. 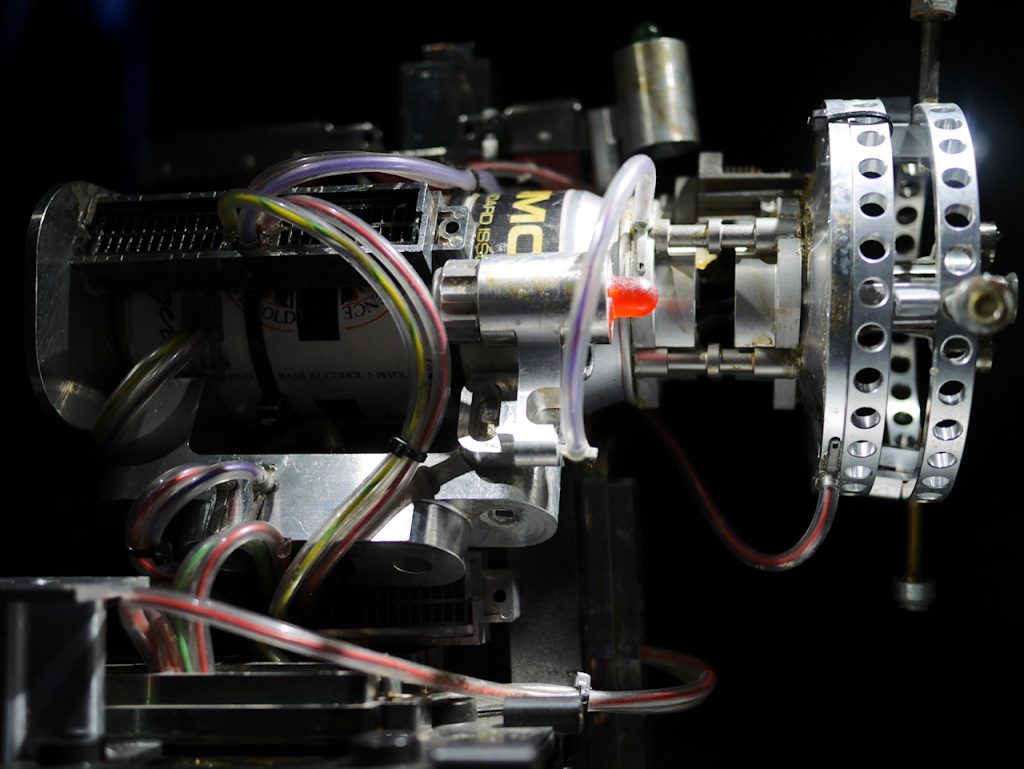 Dimensional Portal Machine__ from ‘Red Dwarf’ (note the beer can at the centre!)

The final part I visited was a short film titled In the Future, They Ate From the Finest Porcelain which lands somewhere between science-fiction and an artistic polemic, with things to say about how history and national identities are formed – by the victors – and an attempt to fight this process through “narrative resistance.” This definitely fell on the art side of the SF-art divide, and was rather on the nose in some of its imagery, but like the Machine two floors below it was an interesting experience after being primed by the exhibition to see how SF themes are portrayed both within and without genre culture.

I think what impressed me the most about the exhibition was how it wrangled the subject into some cohesive themes, but only in order to make you pause and consider rather than insist on the categorisations that we sometimes tangle ourselves up in. I’m not sure how well it would cater to a casual viewer without knowing at least some of the context, but if you treat it as food for thought you should come away with something worthwhile.

“Into the Unknown: A Journey through Science Fiction” at Barbican Centre

The genre-defining exhibition of art, design, film and literature.

From the 19th century cabinet of curiosities, to the vastness of space. Through future cities, into the inner landscapes of human perception.

Uncover the mysterious lands of Jules Verne and Ray Harryhausen where Science Fiction narratives first took root. Venture on an odyssey into our solar system, with vintage artwork promoting Soviet visions of space alongside immersive work by Soda_Jerk. Visit a gallery of aliens, and stand alongside iconic spacesuits from a galaxy of blockbusters including Star Trek and Interstellar.

Imagine dystopian worlds with Margaret Atwood and 28 Days Later. Then, with nowhere left to explore but human consciousness, delve deep and experience the transformation and mutation of the body through the eyes of Jack Kirby and Ex Machina.

Curated by historian and writer Patrick Gyger, this festival-style exhibition consists of more than 800 works, many of which have never been seen in the UK before. Continuing across the Centre, it includes artwork from Isaac Julien, Larissa Sansour and Conrad Shawcross, and an installation from the creators of Black Mirror.

Into the Unknown: A Journey through Science Fiction is curated by Barbican International Enterprises with co-production partners, Brandts –Museum of Art & Visual Culture, Denmark, and Onassis Cultural Centre – Athens, Greece. It will be staged at both venues before embarking on an international tour.

7 thoughts on “Into the Unknown at the London Barbican”