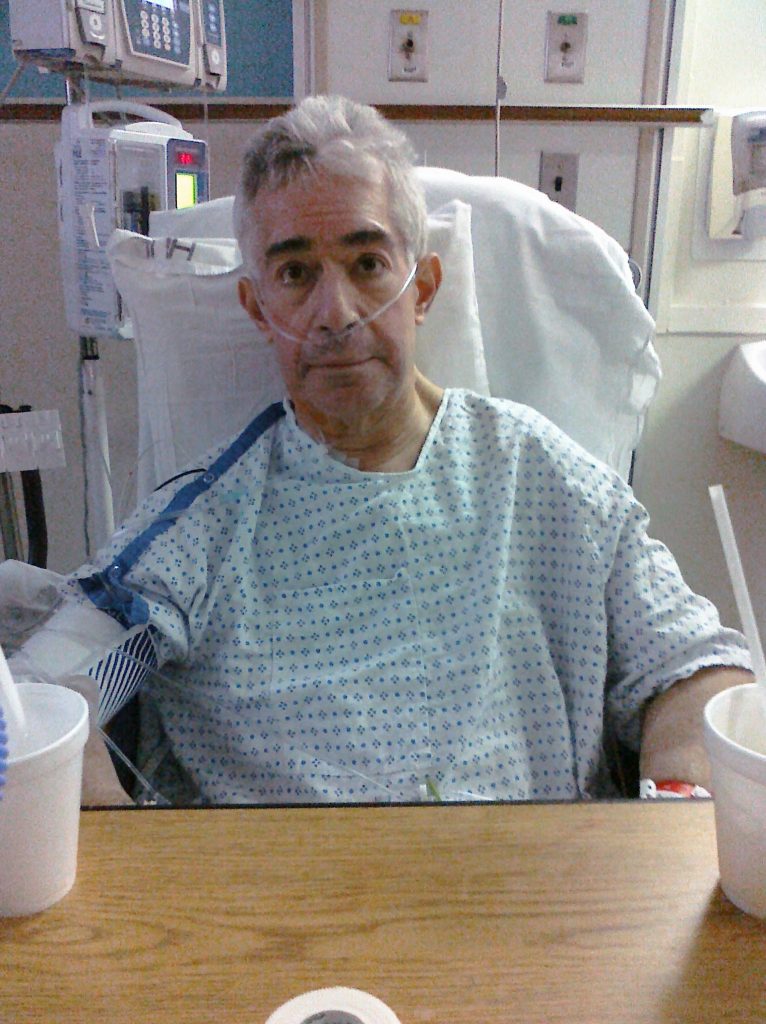 By Steve Vertlieb: It was eight years ago, on March 8, 2010, that I entered The University of Pennsylvania Hospital in Philadelphia to undergo major open heart surgery. I had no expectation whatsoever of surviving the required surgery. I was told by my surgical cardiologist, Dr. Michael Acker, that I’d live only another several weeks without the operation. On the morning of the surgery, I turned affectionately to the apartment living room that I was leaving, along with its countless collectibles and, as the door closed behind me to the world that I had called home, I uttered an emotional farewell to everything that I loved.

They worked on me for five and a half hours as I lay on the surgical table. I had double bypass surgery, as well as Mitral Valve replacement. This photograph of me in my hospital room was taken just a couple of days after my operation. After nine days at The University of Pennsylvania Hospital, I returned home. A comforting, healthy recovery process was not in the cards, however.

As I lay in my own bed for the first time since the operation, I found myself gasping for breath. Terrified, I sat up quickly. Just nerves, I thought. After a moment, I laid down again. I couldn’t breathe. Anxious and afraid, I sat up in bed once more. It must be anxiety, I reasoned. I spent the rest of the day sitting on my couch, watching television with my brother. That night, as I prepared for bed, I laid my head down upon the pillow, and found myself gasping frantically for breath once more. Fearful for my mortality, I spent the remainder of the long night sitting up in bed, fighting sleep, afraid of lying down … and dying. I did this for the next four days until, yearning for sleep and frightened that this was truly the end, I told my brother “I’m dying…take me to the emergency room.”

Early on a Sunday morning, Erwin drove me to the emergency room at Holy Redeemer Hospital where I was immediately admitted. I had fluid filling my lungs, cardiac insufficiency or heart failure, and the beginnings of a blood clot in my leg. After four more interminable days in the second hospital, I was finally sent home. From that day to this, I have been fine.

In the years that followed my brush with death, I have embraced the beauty of life and of living ever more passionately, finding beauty, joy, and love in every imaginable nook and cranny of this, my mortal, all too precarious journey through existence…and yet, in the eight years since my near death encounter with the infinite, I’ve enjoyed some of the most precious, life affirming encounters of my fragile seventy two years. Months after I nearly died on the surgical table, I met my last life-long hero, composer John Williams, in his dressing room at The Hollywood Bowl … a local film maker announced his intention to make a documentary motion picture about my life and career … I was awarded a coveted Rondo “Hall Of Fame” Life Achievement Award for half a century of journalistic endeavor and achievement … and, most importantly, I met the woman that I love, Rochelle (Shelly) Trust. Despite brief appearances to the contrary and a singular flirtation with finality, I’ve discovered meaning, value, and beauty in the richness of living, and in the wonder and fullness of a life well lived. To quote George Bailey in Frank Capra’s inspirational film of the same name, it really has been “A Wonderful Life.”