By Carl Slaughter: In the Charming Tales series, Once Upon a Time becomes Once Upon a Rhyme, Happily Ever After becomes Happily Never After, and the Sword of Destiny becomes the Pitchfork of Destiny. Harper Voyager Impulse author Jack Heckel aims his sly pen at Prince Charming, Rapunzel, Beowulf, the Three Bears, Sleeping Beauty, the Seven Dwarves, Goldilocks, dragons, Robin Hood, and more. And Castle White, is that a takeoff on…

ONCE UPON A RHYME 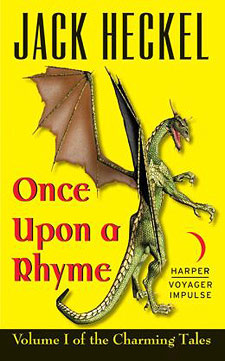 The dragon is dead. The princess has been saved. There is but one problem: Prince Charming had nothing to do with it.

In order to save his royal reputation, Prince Charming must begrudgingly enlist the help of accidental hero William Pickett. The two set out on an adventure that has them fighting trolls, outwitting a scoundrel, and drinking the foulest ale ever, collecting bruises to both body and pride along the way. Meanwhile, the rescued princess, Gwendolyn, turns out to be one dangerously distressed damsel, and an evil presence takes over Castle White in Charming’s absence …

Enter this rollicking world and discover just what happens when a fairytale leaves the well-trodden path of “once upon a time.” 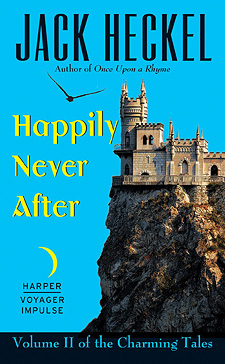 Once upon, once again …

The dragon has been slain, but the problems have just begun for Prince Charming.

Disowned by his father, the King, and abandoned by his only friend, William Pickett, Charming must find a new path in life—but he’s going to need a lot of help. His love, Liz, barely survived an assassination attempt; his former fling, Rapunzel, is in danger; and William is under an evil spell cast by Princess Gwendolyn.

The fate of Castle White hangs in the balance as Charming tries to find himself, while finding new allies along the way—including an odd number of dwarfs (or is it dwarves?) and a reformed beast. But he’s running out of time to stop royally ruinous wedding bells from ringing …

THE PITCHFORK OF DESTINY 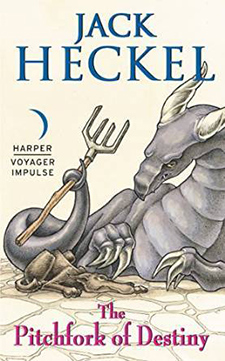 Life in the Kingdom of Royaume has been happily ever for King William Pickett and his fiancee, Lady Rapunzel. But when Volthraxus, the Great Dragon of the North, returns looking for the love of his life, the Great Wyrm of the South, it becomes clear that some fairy tales never end.

After Volthraxus discovers his love was slain by the newly crowned king, he seeks his revenge by kidnapping Rapunzel. Once again, Will teams up with Edward Charming, the only man in all the kingdom with the skill, ego, and dashing good looks to fight a dragon. Our heroes fates depend on finding a weapon re-forged in dragon blood the Pitchfork of Destiny.

But as the two set off after the dragon, Charming s bride, Lady Elizabeth, falls into the clutches of a mysterious sorcerer known as the Dracomancer, who has his own plans for Royaume.