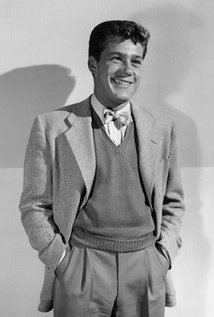 He was also for a while a part of the social circle in the 1950s that included James Dean and Montgomery Clift.

Little remembered is that Larson once acted alongside Leonard Nimoy, who had the title role in Kid Monk Baroni. 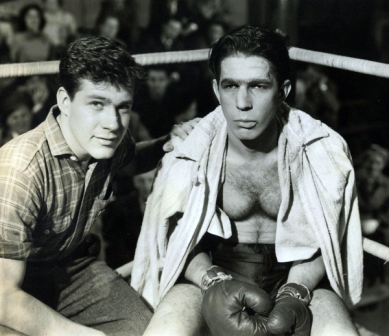 Having become typecast as Jimmy Olsen, when the Superman TV series ended Larson unfortunately had trouble getting roles. He had a bit part on Gomer Pyle USMC in 1965 and another in Law and Order: Special Victims Unit in 2010.

Many of his later credits came from appearing in subsequent versions of the franchise, playing an older Jimmy Olsen in an episode of Lois and Clark , an FBI agent (partnered with Noell Neill!) in the “Paranoia” episode of the Superboy TV series, and a bartender in the movie Superman Returns.

(In the “Paranoia” episode, when Superboy saves a woman who has jumped from a window, Larson’s character exclaims “Jeepers!” like Jimmy Olsen would.)

During the intervening years, Larson became an admired playwright, and librettist, as noted in his New York Times obituary, “A Playwright Better Known as Jimmy Olsen”.

He donned the sweater once again to host a Superman festival on New York’s WOR Channel 9, on Thanksgiving in 1987.

There’s also a blurry, 30-second promo for his hosting gig that includes many brief clips of him in character on the show.

He was life partnered with writer/director James Bridges for a reported thirty-five years, until his passing in 1993, and collaborated as a producer on some of the filmmaker’s productions.