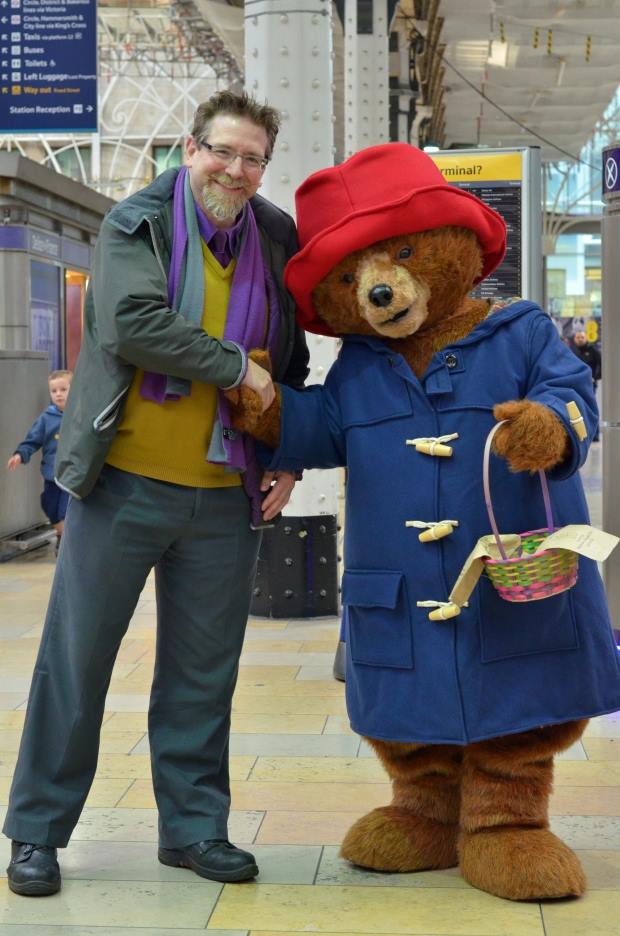 On the heels of winning the Worldcon bid, Dublin 2019 chair James Bacon has been recognized in his day job as a finalist for the RailStaff Awards Train Driver of the Year.

One of 15 finalists, James was nominated by his manager at Heathrow Express, Kirsty Sando. Those who have worked with him on conventions will recognize the same qualities she sees:

James is dedicated, hardworking, fun to be around and supportive of his colleagues. He has his own unique way of making passengers on board his services smile, his announcements are always fun and light hearted and he always puts true customer service at the heart of his job every day. He takes true delight in telling passengers “we are now cruising at 100mph”.and will let passengers know if there is something exciting to see like a passing steam train.

James has worked tirelessly as a driver at HEx for over 10 years, he is a valued member of the team. He will always stop for a chat and puts other people’s problems, questions and queries before any of his own needs. James went through a difficult time in his personal life a few years ago but his positive nature helped to see him through and he now openly uses what he learnt through this time to help other drivers and trainees and is a real advocate of non-technical skills.

His recent promotion to Lead Driver has seen James grow immensely. His passion for the role and desire to see the trainees develop is evident every day. He has often gone out of his way to support the trainees, regularly re-arranging his working days and shifts to help the trainees gain driving hours, most recently he emailed from Helsinki to arrange a shift on behalf of one of his trainees. Not a week goes by where I don’t get an email from James with fantastic suggestions for helping the trainees; he will always offer to give up his own time to work with them. James really cares about his colleagues, seeking out coats for them in rainy weather and buying them coffee if they are tired. A real example of going above and beyond, always.

James commented, “National award so it’s nice to be put forward. Incredible people to be amongst.”

The winner will be announced at the RailStaff Awards ceremony on October 7.

Interestingly, the 2016 Train Driver of the Year was also a fellow with a dash of science fictional flair.

Last year’s Train Driver of the year was Steve Copley from Southern Trains.

“A ‘commuter’s hero’, Steve lifts the spirits of grey-faced Londoners by hosting a guess the year quiz over the intercom to distract passengers from their dull morning commute. He has his own hashtag on Twitter, #timetunneltrain, and has driven changes in customer information within the business.”

For those on the #TimeTunnelTrain, this morning's clue is: In today's year.. Paul McGann was Dr Who.