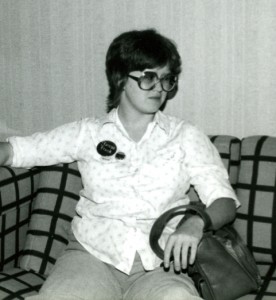 Janrae Frank, a writer and editor in the sf/fantasy field, died January 12 when removed from life support following a stroke.

After contracting polio as an 8-year-old, she turned to writing with the encouragement of her grandmother who gave her an expensive pen and pencil set and said, “Whip them with a pencil.” During the years that she was learning to walk again, she became an avid reader.

Frank sold her first story, “Wolves of Nakesht,” to Jessica Amanda Salmonson’s Amazons! anthology (1979). Over the years she produced two dark fantasy series, Dark Brothers of the Light and the Journey of the Sacred King quartet. In 2004, her short fiction was collected in In the Darkness, Hunting.

As a journalist she wrote about feminism and women in speculative fiction. Her essay “Women Warriors and Earth Mothers” appeared in Washington Post Book World in 1985. Together with Jean Marie Stine and Forrest J Ackerman, she edited New Eves: Science Fiction About the Extraordinary Women of Today and Tomorrow (1994), an anthology of stories which traced the contributions and history of women in science fiction.

Frank’s daughter, in a statement on the Daverana Enterprises website, praised her mother’s character, including that — “She understood, however, for many writers, it is their negative life experiences which fuel their creativity. She used this to full effect in her own works, and encouraged others for whom this would be the case and had the ability to turn their sorrow into beauty.”