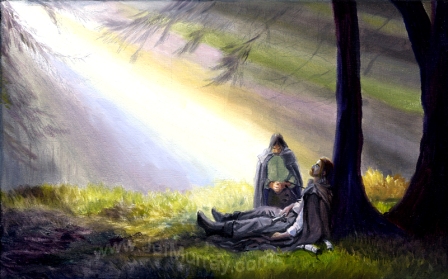 Artist Jef Murray, known for his illustrations of works by Tolkien and Lewis, died unexpectedly August 3 at the age of 55. Carl Hostetter announced his passing on The Mythopoeic Society’s Facebook page. He is survived by his wife Lorraine.

Murray loved the writings of G. K. Chesterton, and used his work to explore the connection between myth/fairy tales and Christian thought.

“And that is how the people of Orbaratus destroyed themselves.”

Charles sat looking at the old man across the table. Thunder rumbled outside the diamond-paned windows of Charles’ Oxford flat, and the deep purple light of the approaching storm contrasted eerily with the flickers of gold and red from the fireplace and the lighted candles on the mantel. Upon the table, between the two friends, sat an ancient book, bound in black leather, that Azarias had brought with him. It was a medieval collection of spells, he had told Charles….

Murray was nominated for the Imperishable Flame award in 2006.