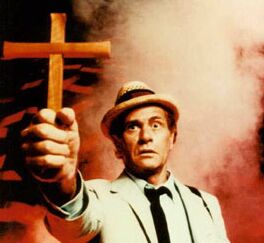 Jeff Rice, creator of Carl Kolchak, passed away July 1 in Las Vegas at the age of 71. His novel about the character was somewhat unintentionally the basis for two TV movies and an ABC series.

David Dawidziak reports in The Night Stalker Companion that the television movie rights to Rice’s 1970 unpublished novel was sold without his permission to ABC. Rice sued the network, which settled before the series aired, and gave creative credit on screen to Rice.

But that left him well short of Easy Street. By the time all the Hollywood double dealing was resolved, Rice’s novel was published in 1973 after the hugely successful TV movie. A series followed, and Rice also found success with a second novel, The Night Strangler, co-authored with Richard Matheson

The Kolchak: The Night Stalker TV series aired on ABC during the 1974–1975 season. Played by Darren McGavin, Kolchak investigated mysterious crimes touching on the supernatural and the science fictional.

The series was preceded by two movies for television, The Night Stalker (1972) and The Night Strangler (1973).