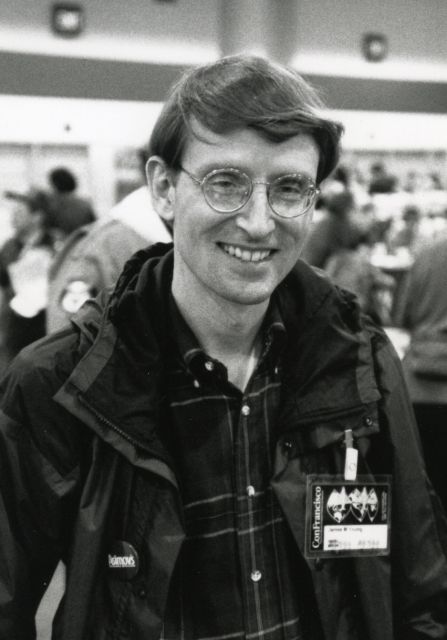 Jim Young at the 1993 World SF Convention, Confrancisco. Photo by © Andrew I. Porter.

Jim Young, who helped make Minneapolis fandom legendary, died peacefully on June 12 around 11:10 a.m., a week after emergency surgery for a malignant brain tumor. He never regained consciousness. He was 61 years old.

Jim was present at the creation of MN-Stf, The Minnesota Scientifiction Society, in 1966. He “did nearly everything” at the first Minicon in 1968 remembers Fred A Levy Haskell. Even Minicon’s famous blog was rumored to have originated as a punch recipe learned from his mother.

Jim was the original spearhead for the Minneapolis in ’73 Worldcon bid. Having been lucky enough to lose to Toronto, Minneapolis fans never stopped throwing bid parties.

And naturally Jim participated in Minneapa, the local amateur publishing association. Jim appears in the third row of this 1974 photo of Minneapans with a drink in his hand. (Blog, perhaps?)

Jim’s career in the State Department’s Foreign Service took him to Botswana, Russia, Nigeria, and England. After retiring as the U.S. Coordinator for the Organization for Security and Cooperation in Europe (OSCE) he moved to Southern California and worked tirelessly to break into the entertainment industry.

He also made his mark as a pro writer with two SF novels, The Face of the Deep (1979) and Armed Memory (1995), and four stories. “Microde City” inspired the cover of Asimov’s June 1993 issue, which depicted one of the Hammerheads who use their genetic engineering technology to transform humans into sharks. Dave Langford’s eye was caught by a line in Jim’s “Ultraviolet Night” (F&SF, March 2004) – if getting quoted in Thog’s Masterclass is not a pat on the back, I suspect Jim intended the effect he created:

As he stood there waiting for his lower brain to stop broadcasting retaliatory lizard thoughts, it occurred to him that this was a message loaded with semantic interference, a veritable Cadillac of cognitive dissonance.

In one of my last conversations with Jim he said he had a novel on submission with Tor. And last year we exchanged e-mails as we both hoped to get a story out of his latest role – he played Adolf Hitler in Nazis at the Center of the Earth (under the name James Maxwell). Jim was waiting on a green light from the director, in whose good graces he naturally wanted to remain. For whatever reason we never got that done and the project went straight to video this spring. I’m sorry I didn’t get to write that up, and the rest of the stories that might have come from the acting career he enjoyed so much.