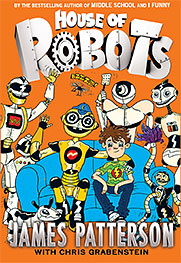 Sammy Hayes-Rodriguez has never had an easy time fitting in at school. His mother is an inventor, his father is a graphic novel artist, and his beloved little sister has an immune condition that keeps her confined to the house. His best friend Trip has a talent for saying the wrong thing at the wrong time.  And then, there are the robots: a houseful of his mother’s creations, programmed to do everything from housework to tutoring, plus some that don’t do anything useful at all.

When Sammy’s mother insists that he take a robot named E to school with him, he knows that he’s in for a record-breaking amount of teasing and trouble-and when E starts insisting that he is Sammy’s brother, the situation goes from bad to worse. Sammy refuses to have anything to do with E at school, even when the robot’s popularity starts to eclipse Sammy’s and Trip’s.

But when E is kidnapped, Sammy realizes that he was starting to get fond of his robot brother, and he teams up with friends (both human and robot) to solve the mystery of E’s disappearance. 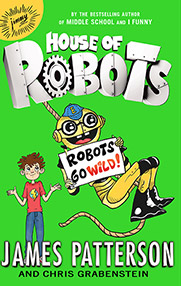 In book two of the House of Robots series, it’s ‘bot brains versus ‘bot brawn in an all-out war!

Sammy Hayes-Rodriguez and his “bro-bot” E are making new friends every day as E works as his bedridden sister Maddie’s school proxy. But disaster strikes when E malfunctions just in time to be upstaged by the super-cool new robot on the block–and loses his ability to help Maddie. Now it’s up to Sammy to figure out what’s wrong with E and save his family! 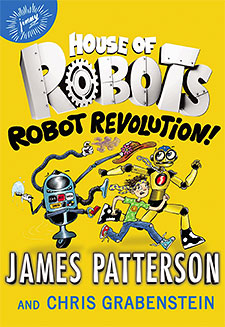 Robots on strike! Sammy’s underappreciated mechanical helpers are causing chaos in book 3 of the bestselling House of Robots series.

After a few early glitches in their relationship, Sammy and his “bro-bot” E are now fast friends. In fact, E is such a valued member of the family that the other electronic occupants of the House of Robots are feeling sorely unappreciated. And when Sammy’s inventor mom becomes distracted by a top-secret project, the robots soon begin to fall into disrepair.

Cue a robot revolt, with the droids wreaking harmless havoc in the house! Armed with pranks like glue in the shampoo bottles and flying toast missiles, the robots demand to be cared for. It’s up to Sammy and his disabled sister Maddie to keep the peace until his mom reveals her secret project…and why it was worth the wait.

“Underlying the novel’s laughs are themes of friendship, compassion, and family, particularly in regard to Sammy’s devotion to his younger sister…and his deepening relationship with his ‘bro-bot.'”  ?  Publishers Weekly

James Patterson holds the Guinness World Record for the most #1 New York Times bestsellers, including Middle School and I Funny, and his books have sold more than 325 million copies worldwide. He received the Literarian Award for Outstanding Service to the American Literary Community at the 2015 National Book Awards.  A tireless champion of the power of books and reading, Patterson has created a new children’s book imprint, JIMMY Patterson, whose mission is simple: “We want every kid who finishes a JIMMY Book to say, ‘PLEASE GIVE ME ANOTHER BOOK.'” He has donated more than one million books to students and soldiers and funds over four hundred Teacher Education Scholarships at twenty-four colleges and universities. He has also donated millions to independent bookstores and school libraries. Patterson will be investing his proceeds from the sales of JIMMY Patterson Books in pro-reading initiatives.