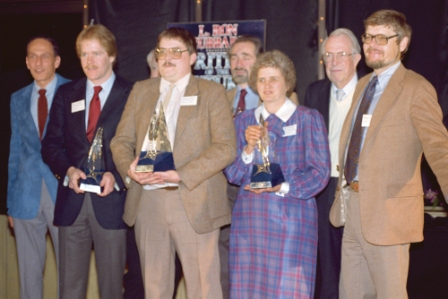 Jor Jennings was a quarterly Writers of the Future Contest winner during its first year. Just behind her are Robert Silverberg and Jack Williamson. Gregory Benford is to the right, Roger Zelazny is on the left.

Marjorie “Jor” Jennings, one of the first Writers of the Future Contest winners, died of a heart attack on August 27.

She joined the Los Angeles Science Fantasy Society in May 1978. That was about the same time she was enjoying her first success selling sf. “The Devil and All Her Works” and “Unemployment Problem” appeared in Galaxy in 1978.

Her story “Other” was published in Rod Serling’s The Twilight Zone Magazine in 1982, and collected in The Year’s Best Fantasy Stories 9 (ed. Art Saha).

3 thoughts on “Jor Jennings Passes Away”