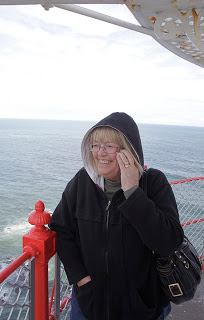 Kathryn Daugherty passed away on February 24 after a two-year battle with cancer. Her husband, James, plans to hold a memorial service this spring in Maui. They were married nearly 40 years.

Kathryn’s life ended in the home in Henderson, Nevada that the couple had called their Dream House. When they started work on it in 2009 she set out to track every step on her blog Adventures in Surreal Estate: Building our Dream House in the Desert. Then illness took its toll and she stopped posting in September 2010. The house did get finished — she told Facebook friends on January 6 they had moved in. Unfortunately she did not have long to enjoy it.

She was among the most respected sf convention runners, having done indispensible work as a department head and division manager at many Worldcons, as well as working Baycons, serving as the “beach chair” of the 2000 Westercon in Hawaii, and as San Francisco Science Fiction Conventions Secretary. Chris Garcia credits her invitation to participate in BayCon for his return to fandom in 2000.

She was gracious and charming. She could also be really funny, too, in the penetratingly acerbic way fans love best. I remember her scoffing about the MagiCon “pocket program” —

Did you actually carry around that mammoth publication in your pocket? Even my purse wasn’t big enough and somewhere in there is the map to the Lost Dutchman Mine and Judge Crater’s phone number.

Kathryn and James were Loscon 31 Fan Guests of Honor. Her brief autobiography wistfully chronicles the many ways fandom called out her gifts:

One day the woman said to her husband, “Look, there is going to be a convention in the city Right Next Door for people who love fantastic literature. Let’s go.” They went and discovered a new world to explore. The woman saw people singing. She had a good voice and thought, “Maybe I could do that too.” The woman saw people with beautiful costumes. She had a sewing machine and an impressive collection of cloth. She thought, “I could make a costume some day.” She saw artists and writers and scientists. “Maybe there is a place for me there,” she thought. But when she was asked to be a door guard for the masquerade, she knew she had found her calling. She got a ribbon to wear and got to hang out with the people who were actually running the convention. She began to travel to other conventions to volunteer. She began to plan other conventions. One day she was even the Chair of her very own convention.

She was an engineer by profession. Her favorite job at the university had been feeding punchcards into the giant CDC 6400.

Kathryn and her husband were genuine globetrotters. Over the years she and James visited a very long list of countries. For a time Kathryn even lived in New Zealand. She once told the SMOFs list that among the places she most liked to explore were Cambodia, Bali and Vietnam. Her blogs were filled with photos of international travel and accounts of cruises and tours.

Most fans discover fandom through their love of the stories but when they become absorbed in its social aspects the reading tapers off. Not in Kathryn’s case. I found her current and complete familiarity with the latest works in the sf field one of the most impressive things about her. Some years she racked up reading 200 books. She was so knowledgeable and articulate fans loved to attend her one-woman convention programs to hear pointers about developing new writers and take notes on her award recommendations. Or sometimes she’d be the centerpiece of a panel: one of the best times I ever had was appearing with her and Chris Garcia to handicap the Hugo nominees at the 2008 Westercon.

Her legion of friends, myself among them, will miss her strength, humor, and knowledge.