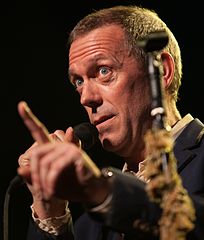 I thought it was time to follow up on Tomorrowland, the Walt Disney Studios project I wrote about in “Don’t Forget To Hype”, which is gaining attention through cryptic publicity.

The movie, directed by Brad Bird and co-written by Damon Lindelof, was originally announced under the working title 1952.

We now know that Hugh Laurie (House) will play the villain opposite George Clooney’s hero.

The film will shoot in Vancouver beginning August 1, according to the B.C. Film Commission.

And casting sheets give this synopsis of the story:

A teenage girl, a genius middle-aged man (who was kicked out of Tomorrowland) and a pre-pubescent girl robot attempt to get to and unravel what happened to Tomorrowland, which exists in an alternative dimension, in order to save Earth.

Alternatively, The Guardian says this about the story:

Described as a paean to Steven Spielberg’s Close Encounters of the Third Kind, the 1978 film in which a man goes in search of aliens who are visiting Earth…

Can it be, the less you know, the more you’ll want to see the film?

2 thoughts on “Keeping an Eye on Tomorrowland”