Ray Bradbury makes news every day, even when his house isn’t being demolished — though one of these three stories involves that melancholy topic. 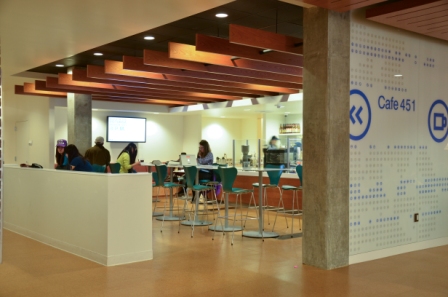 (1) UCLA has remodeled the Charles E. Young Research Library and endowed it with a new eatery called Cafe 451, which is named in honor of Ray Bradbury’s famous novel .

Conveniently located next to the extensive study space of Young Research Library, this café offers a cozy place to study or to refuel with a quick bite. Coffee drinks are the core of the menu, but there’s also a selection of pastries and light meals such as gourmet sandwiches, salads, and sushi.

(2) Someone involved with the ReUse People of America, who will be selling structural material recovered from the Ray Bradbury home, defended its owners’ decisions in a letter to the Los Angeles Times published February 1 in the Calendar section.

It should be noted that Ray Bradbury’s former home in Cheviot Hills was not, in fact, irresponsibly demolished (“Bradbury House Torn Asunder, Jan. 18). Rather, the new home-owners, Thom and Blythe Mayne, opted to have the house “de-constructed” – a conscientious green-demolition process where all reusable materials are carefully removed and donated for reuse. This included the cabinetry, doors, lights, plumbing fixtures, even the vintage vent registers and the old-growth framing timber.

The entire process was overseen by the ReUse People of America, a non-profit environmental organization dedicated to diverting building materials from over-burdered landfill sites. After being removed, the salvaged materials went to the ReUse )People Warehouse in Los Feliz where the public has the opportunity to acquire well preserved building materials at reasonable costs.

The new owners, the Maynes, should be lauded for their efforts to save these valuable materials and ensure minimal environmental impact. The new home to be erected on the site will no doubt be a beautiful addition to the neighborhood.

(3) During his 35-year teaching career at Gouveneur High School in New York, Frank Palumbo taught more than 200 titles by Ray Bradbury. He kept up regular correspondence with the master for the last 16 years of Ray’s life.

He still teaches his works through the lifelong learning group Stimulating Opportunities After Retirement at SUNY Potsdam. The Canton resident will present the three-week session “Ray Bradbury, Master of the Short Story” through the SOAR program in March.

….But in May 1996, on a stop at the school’s main office, Mr. Palumbo was told a large, stuffed enveloped had arrived for him. He was delighted to see it was from Ray Bradbury. It included lots of reproductions of art from his books, original sketches and notes of appreciation, thanks and an apology for taking so long to respond.

“The thing that really caught my attention was that he gave me his home address,” Mr. Palumbo said. “I went, ‘Wow! What am I going to do with this?’”

The last lines of the Mr. Bradbury’s letter answered that question: “Let me hear from you.”

What followed were years of correspondence. His students sent Mr. Bradbury news of their Bradbury-related projects, run in conjunction with the school’s art department, and thoughts about his stories. Mr. Palumbo sent the author news of his family.