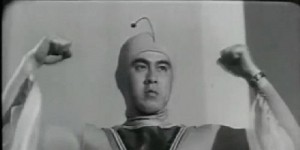 Ken Utsui in Attack From Space.

It seems odd that in the same week the original Captain Video died, the Japanese actor who played the space super hero known here as Starman (kind of a Green Lantern type) also passed away. The man who played Japan’s first cinematic superhero died March 14 of natural causes at the age of 82.

In the 1950s, Ken Utsui starred in 60 films for Shintoho, including the Super Giant series. After he moved to Daiei film in 1963 he starred in another 52 films. He also appeared frequently on TV.

This musical tribute on YouTube has lots of clips of his movie work.